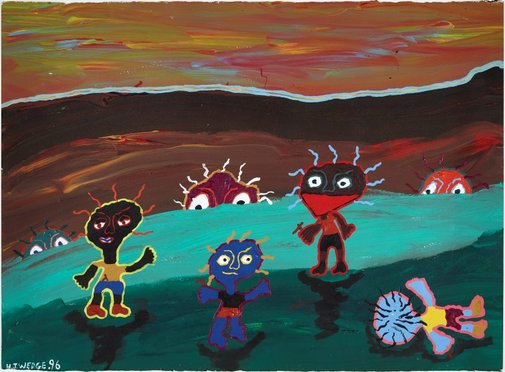 H.J. (Harry) Wedge was born on Erambie Mission near Cowra in central New South Wales, and recalls his memories of life on the mission through his painting. Initially focusing on photography, Wedge enrolled at the Eora Centre TAFE (Technical and Further Education) in Redfern, Sydney, in 1989. He soon shifted to painting in acrylic, honing his surrealist style. After completing his education at the Eora, he became a member of the Boomalli Aboriginal Artists Cooperative, Sydney. He began exhibiting alongside such contemporaries such as lan Abdulla and Elaine Russell.

Wedge's paintings suspend a moment in time and isolate the emotive elements. The multiple horizon lines, and transient colours of the sky, seem to elude the suggestion of daylight or night time. His paintings occupy a timeless space.

Wedges paintings have been described as a personal journal, recording his stories, melding with current affairs and political incidents. He paints postcolonial narratives that critique social circumstance and environmental concerns. He has stated that he tries '... to paint what I dream, what I hear on 'A Current Affair', things you can even hear people talking about on the train ...'.

Browse other works by HJ Wedge 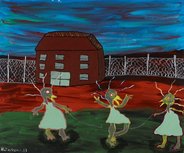