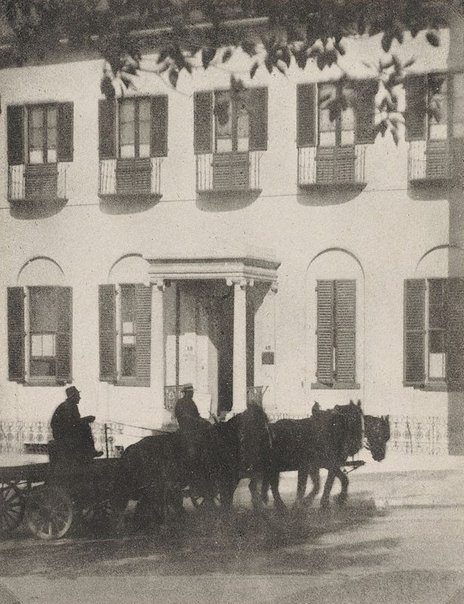 The Old Treasury building was taken by Cazneaux en route to his inner city workplace, Freeman’s. This image is distinctively different from other pictorialist photographs which manipulate smoke, steam and clouds to soften the line of the pictured objects 1. Here Cazneaux achieves radical contrasts in light through utilising the bright, quintessentially Australian sun. The luminous façade of the Treasury building is set in radical contrast to the silhouetted horses and carriages in the foreground. This stark graduation in light appears to reduce the depth of the scene. The opaque foliage framing the upper edge of the photo reinforces this flatness. This picture was resolved by the bromoil photographic process. A gelatin silver photograph is bleached and fixed, then soaked in water. A greasy ink is then applied and gradually built up to the required density 2.
Harold Cazneaux was born in Wellington, New Zealand in 1878. His parents, Pierce Mott Cazneau and Emma Florence (née Bentley) worked in commercial studios in New Zealand before returning to settle permanently in Adelaide during the early 1890s. At the age of 18 Cazneaux went to work alongside his father at Hammer & Co studio as a retoucher. He moved to Sydney in 1904 to join the larger portrait firm, Freeman’s quickly ascending to the position of ‘chief operator’ (as camera portraitists were known). Studio work was highly formulaic, with little scope for creativity. Cazneaux used his time walking to and from work to experiment with pictorialist aesthetics 3. The Photographic Society of New South Wales organised an exhibition of Cazneaux’s photographs in 1909, the first such solo exhibition of its kind in Australia. In 1916 he and fellow pictorialist photographer, Cecil Bostock founded the Sydney Camera Circle. The group was particularly interested in the how pictorialism could be adapted to and extended within an Australian context. The mechanised, standardised and frenetic pace of Freeman’s increasingly took its toll on Cazneaux’s creativity and health, and he resigned in 1917. He moved with his wife and daughters to the Sydney suburb of Roseville, and in 1920 he was employed as the official photographer for The Home magazine. This new position let him work in a varied indoor and outdoor environments. In 1938 Cazneaux was awarded an Honorary Fellow of the Royal Photographic Society of London. He continued to work until his death in 1953.
1. Miller S 2007, ‘Chapter 4: Australian Pictorialism’ in, ‘Photography: Art Gallery of New South Wales Collection Handbook’, Sydney p 72
2. Baldwin G 1991, ‘Looking at photographs: a guide to technical terms’, J Paul Getty Museum, USA pp 11-12
3. Newton G 1988, ‘Shades of Light: Photography and Australia 1839-1988’, Australian National Gallery, Canberra p 85