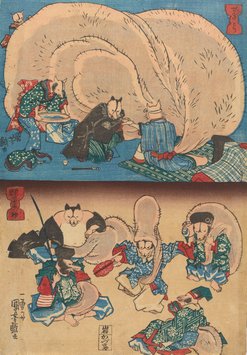 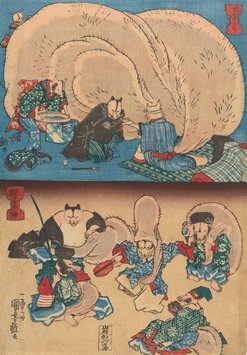 The tanuki, frequently translated into English as ‘raccoon-dog’, is a common comic yōkai character. The creatures, which are real animals, are found throughout Japan and have long been associated with the ability to shape-shift and cause mischief. In legend Tanuki are known for their gigantic scrotum which are used to humorous ends in many stories and depictions.

Utagawa Kuniyoshi’s famous series of tanuki images emphasise this special feature. Released around 1834, this print shows at the top a sick tanuki being cared for and below a group of tanuki using their scrotum to style themselves as the seven gods of good fortune. The tanuki in the centre is portraying Fukurokuju, a god of wisdom, luck, wealth and happiness known for his large head.