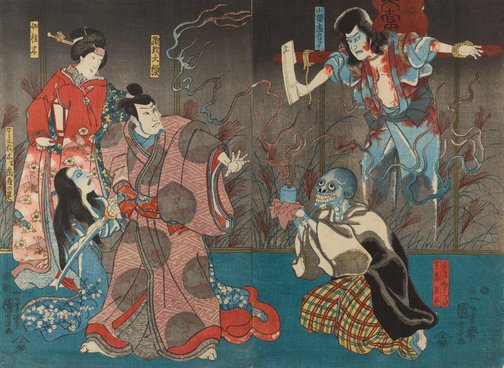 Utagawa Kuniyoshi was an artist famed for his extraordinary illustrations of scenes from literature and legend as well as the popular Japanese theatre. He was also a teacher of Tsukioka Yoshitoshi and Kawanabe Kyôsai.

This scene from a kabuki play of 1851 was based on true events of 1653, with the names of the characters and era of the incidents changed to avoid censorship. It is a rare kabuki play about political protest and the plight of farmers whose livelihoods were destroyed by a greedy daimyo (lord). The character of Tōgo, a mayor who challenged the daimyo, was based on the historical figure Sakura Sōgo (Sōgorō). Crucified for his impudence, after death he haunted those responsible for the suffering of his townspeople.