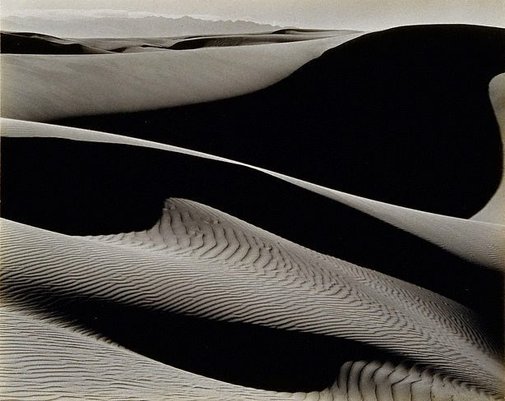 'To clearly express my feeling for life with photographic beauty, present objectively the texture, rhythm, form in nature without subterfuge or evasion in technique or spirit, to record the quintessence of the object or element before my lens, rather than an interpretation, a superficial phase, or passing mood – this is my way in photography. It is not an easy way.' Edward Weston 1927 1

Weston is a central figure in American photography, from his early portraits in California to his mature studies of natural objects and nudes. In his search for an enduring image that captured the timeless ‘essence’ of the object, he often resorted to long exposures of up to six hours. This was in stark contrast to the fleeting images of life in motion that became possible with the availability of smaller faster cameras.

In some respects the pristine clarity of his close-focus images of vegetables and stones resembles the new objectivity of Albert Renger-Patzsch or Karl Blossfeldt but they could not be more different. Whereas the Germans took a primarily objective, even scientific, view of natural and made objects, Weston’s images always seem to take on a metaphorical dimension. The Germans seldom thought of their work as art, while Weston was a powerful advocate for the photograph as an autonomous art object.

Weston asserted that his photographs had no psychological attributes and yet his partner Tina Modotti found the pepper or capsicum images physically disturbing.2 It is apparent that his studies of nudes in the desert and his pictures of sand dunes tend to converge as he clearly emphasises anthropomorphic qualities in the sensuous folds of the dunes, while the bodies of his female models are abstracted until they seem more like rocks or landforms. Given Weston’s association with the Stieglitz circle, it is interesting to compare his eroticisation of natural form with the paintings of Georgia O’Keeffe.

© 1981 Centre for Creative Photography, Arizona Board of Regents

Browse other works by Edward Weston