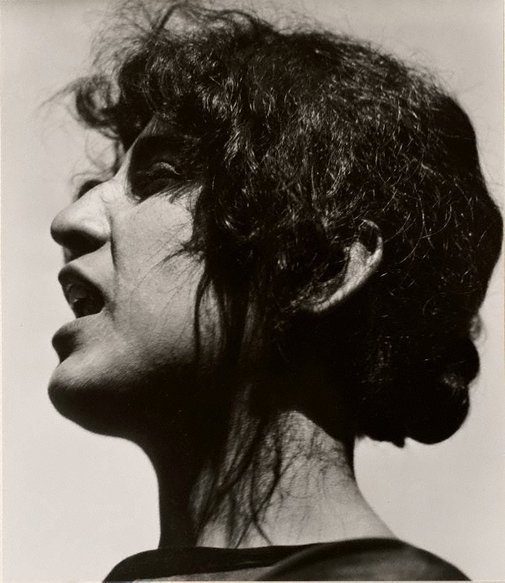 Edward Weston’s Mexican years were of great importance to him and allowed for the maturing of his vision in relation to photography. Accompanied by Tina Modotti, whose own work developed at this time, Weston experimented with pure form through monumental portraits (of which ‘Guadalupe de Rivera, Mexico’ is a classic example), images of landscapes and buildings, still-lifes and nudes.

Weston’s portraits of those he encountered in Mexico are uniformly compelling. Often taken with a hand-held camera against a plain background and with strong lighting, these images emphasise individuality, modernity and dynamism.

Guadalupe de Rivera was Diego Rivera’s wife at the time and both were among the group of people Weston and Modotti associated with. Weston described Guadalupe in his ‘Daybooks’ as ‘tall, proud of bearing, almost haughty; her walk like a panther’s, her complexion almost green, with eyes to match’.1 As he worked on the portrait, Weston wrote: ‘I am finishing the portrait of Lupe. It is a heroic head, the best I have done in Mexico; with the Graflex, in direct sunlight I caught her, mouth open, talking, and what could be more characteristic of Lupe! Singing or talking I must always remember her.’2

This later print by Weston emphasises, through the dramatic effect of light and shade, the strong lines of the face. The shape of the open mouth is echoed by the shadowed eye above and the jawline below. The diagonal of jaw to ear which runs in parallel to the nose also adds to the dynamism of this image. Outdoors, with the sun shining on her hair, this is a portrait of a remarkable woman.

© Centre for Creative Photography, Arizona Board of Regents

Browse other works by Edward Weston