Activating the shadow machine, from the album The Peregian Codex 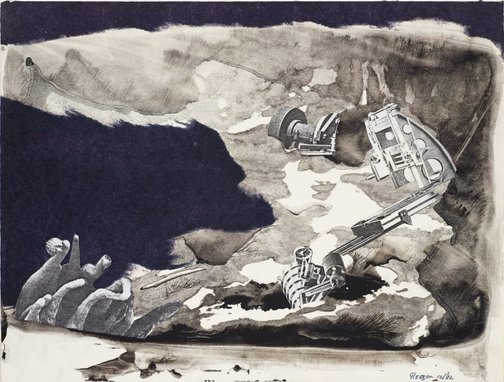 James Gleeson (1915-2008) is renowned as Australia’s foremost surrealist painter and poet. Although his career as an artist began during the 1930s under the influence of artists and writers of the surrealist movement, his work as a writer, critic, lecturer and curator dominated his time until the age of 67 when he decided to devote himself full-time to painting, and embarked on his acclaimed late series of large-scale landscape paintings.

The inspiration for that series was a suite of 22 drawings made at Peregian Beach in Queensland between December 1982 and January 1983. Gleeson made these drawings during his annual holiday at the end of 1982 – when he and his partner Frank O’Keefe stayed at Peregian Beach and spent time exploring the rock pools after storms.

Inspired by the shapes and colours he had witnessed, Gleeson worked on this series of drawings with decalcomania and collage on glossy photographic paper, using coloured tissue paper and photocopies of old wood and steel engravings for collage. As he later stated ‘I worked on this sequence of decalcomanias using collage to enhance the suggestions I discovered in the random dispositions of the pigment. To convert it into a landscape I applied a film of black or coloured tissue papers, often in layers, and I completed the transformation by adding a further collage of images as extensions of the implications provided by the paint’.

He first encountered the technique of decalcomania during the 1930s when it was promoted by surrealist André Breton as a means by which anyone could explore Surrealism.

The drawings were collated into an album known as ‘The Peregian Codex’ in the late 1980s by curator and art historian Lou Klepac.

Purchased with funds provided by the Gleeson O'Keefe Foundation 2017