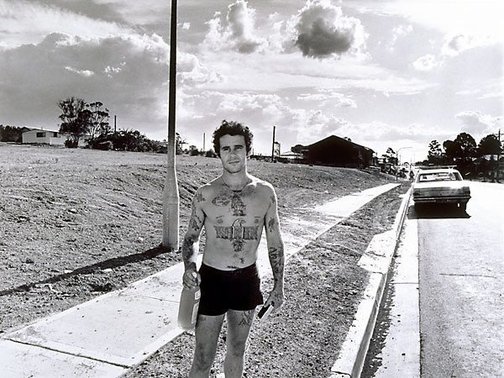 The work of Gerrit Fokkema exhibits a particular sensitivity to the uneasiness of people in Australian landscapes, both urban and rural. Fokkema was born in New Guinea in 1954, but raised in Canberra and worked as a press photographer before freelancing from 1986. Although his photographs demonstrate an interest in the formal qualities of landscape, the sense of rhythm his compositions generate also evoke the monotony of Australian space - sweeping terracotta roofs and long straight paths. This monotony is only interrupted by the presence of the human figure, usually isolated, alone and awkwardly out of place. In 'Blacktown Man' 1983, the flat image of the man appears dramatically superimposed on the land and sky of the suburban street. By reminding us of our sometimes uncomfortable relationship with the spaces we inhabit, Fokkema's work rejects any attempt to romanticise Australian life.

Browse other works by Gerrit Fokkema