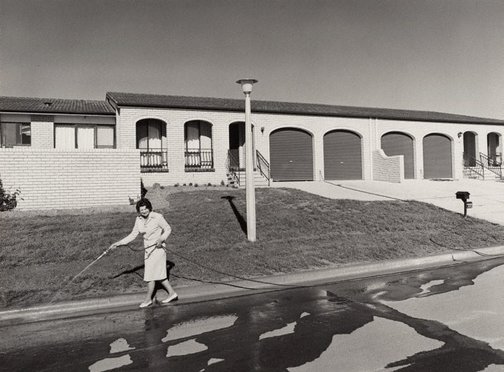 Gerrit Fokkema’s ‘Woman hosing, Canberra’ is an affectionate and gently ironic portrait of suburban life in Canberra. Fokkema was familiar with his subject matter, raised as he was in the nearby township of Queanbeyan. After studying photography at Canberra Technical College 1974-77 he became the staff photographer for the ‘Canberra Times’ in 1975. He held his first exhibition in the same year at the Australian Centre for Photography, Sydney. His career as a photo-journalist lead him to work with the ‘Sydney Morning Herald’ in 1980 and participation with several international ‘Day in the life of….’ projects between 1986 and 1989.

Fokkema uses the ‘decisive moment’ of photo-journalism to reveal the incidental quirks of ordinary life in this image. The bland uniformity of the streetscape, with its identical archways and mundanely shuttered doors, is punctuated by the absurd proposition of a woman watering the street rather than the adjacent grass. Her presence is the only sign of life in an otherwise inanimate scene, and her actions suggest a kind of strangeness that lies within the normality of suburbia. Many of Fokkema’s images play with such chance incidences and odd juxtapositions, revealing his interest in surrealism and the notion of automatism. Indeed, the repeated archways and the lone figure inhabiting otherwise empty urban space of ‘Woman hosing, Canberra’ recall the proto-typical surrealist painting, ‘Mystery and melancholy of a street’ 1914, by Giorgio de Chirico. Fokkema’s image is, however, very much a product of Australia – of its bright ‘available’ light and of the dream of home-ownership. Fokkema has continued to document the Australian way of life. In 1986 he left newspapers to freelance as a commercial photographer and published ‘Wilcannia, portrait of an Australian town’. He has since exhibited works based on tender observations of his family members and of family life.

Browse other works by Gerrit Fokkema