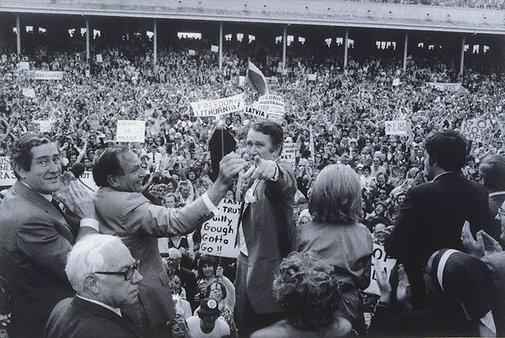 Over the past thirty five years, Roger Scott has captured aspects of Australian life with intimacy and affection. Scott's project has been to make the photographer invisible, to be the silent observer in search of a moment. He was born in Sydney in 1944 and worked as a photographic printer before studying at Sydney Technical College as a photographer. He is particularly renowned for his early photographs of Vietnam War demonstrations in which the strength of his composition balances both the individual's and crowd's experience of this critical point in Australian history. Scott is drawn to photographing protests, parades, shows and crowded beaches, as if they afford the anonymity he has sought from which to watch his subjects - and wait. In 'Malcolm Fraser, Randwick' Scott is caught in the act by Fraser - subject and photographer both trapped in each other's headlights.