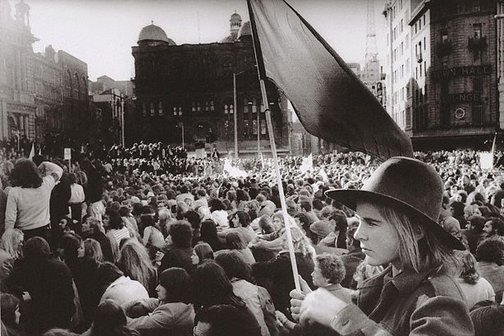 Since the early 1970s Roger Scott has photographed people in an impromptu and uncontrived way, capturing many aspects of Australian life. Scott began his career as a printer, later studying photography at Sydney Technical College. Following travel in Europe in 1978, he set up his own business as a documentary photographer and specialist printer of black-and-white work.

Scott’s project has been to make the photographer invisible, to be the silent observer in search of a ‘decisive moment’, often capturing his subjects unawares. His approach has produced a body of work sometimes marked by a wry humour or a sensibility attuned to the oddities of everyday life. Scott has been particularly drawn to the social rituals of recreation and public gatherings, photographing parades, shows and crowded beaches, situations perhaps which have afforded him the anonymity from which to wait and watch. Scott is also known for his capture of the changing social currents in Australia during the 1970s, exemplified by his photographs of Vietnam War moratorium demonstrations in the early 1970s. Of this time Scott has said: ‘I knew I could make a point with my camera. It was exciting. The old conservative world was ending and a new Australia was beginning.’1 With the flag-bearing youth profiled in the foreground against a sea of gathered people ‘Vietnam march George street’ is almost revolutionary in feel. Of this and related images Scott has recalled: ‘The demonstration was almost silent. The atmosphere was electric. The protesters were committed to making their presence felt … It was clear they wanted to show the government that they were mighty unhappy.’2