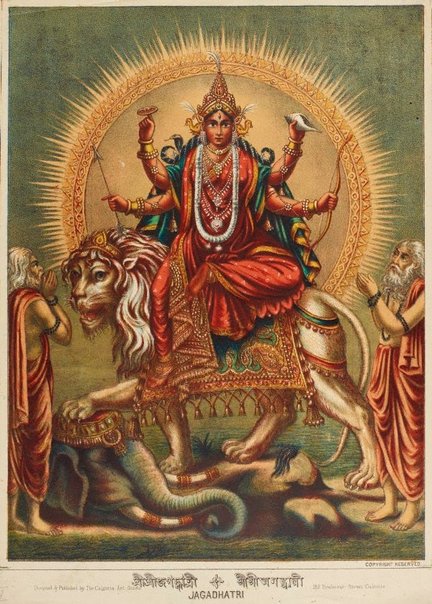 As Ravi Varma’s prints became extremely popular in the late 1800s other presses that produced similar material were established. The Calcutta Art Studio was established circa 1878 by Ananda Prasad Bagchi and four of his students from the Government School of Art. Beginning with hand coloured monochrome prints the studio quickly purchased a lithographic press and began to produce chromolithographic religious prints like this one.Jagadhatri is a form of the great goddess, Devi, like Durga, and she shares similarities with the latter. However, Jagadhatri varies slightly from Durga in that she defeats the elephant demon, Karindrasura, rather than the buffalo one, Mahishasura. Jagadhatri means ‘holder of the world,’ and she is worshipped most heavily in the Bengal region. Two inscriptions along the base, probably in Hindi, along with the English note “Designed and Published by The Calcutta Art Studio 185 Bowbazar Street Calcutta.”

Browse other works by The Calcutta Art Studio