Self portrait in the studio 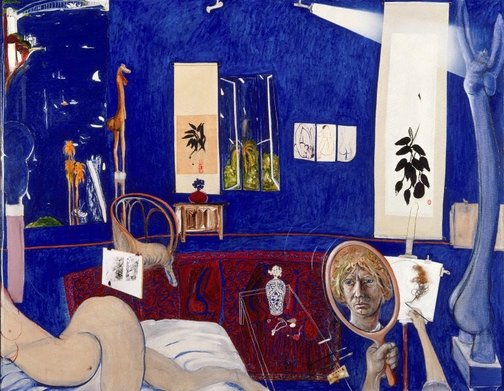 Similar to Brett Whiteley's other major paintings of this period, 'Self-portrait in the studio' exudes a sense of sumptuous living and the liquid presence of the harbour through what he called 'the ecstasy-like effect of Ultramarine blue'. Whiteley's tiny mirror self-portrait also reflects the influence of Eastern art in his portrayal of man as merely part of a larger landscape. However, this painting also hints at a darker side, as Wendy Whiteley explained in 1995:

... he was warning himself and other people watching. It was the cage of his interior, his addiction, the window or a glimpse of possible escape into paradise: the escape from one's psyche.

His last studio and home - 2 Raper Street, Surry Hills in Sydney - is now a museum managed by the Art Gallery of New South Wales.

This painting won the Archibald Prize in 1976 and was acquired by the Gallery in 1977.

Wendy Whiteley on 'Self-portrait in the studio' (1976)

Wendy Whiteley on the life and work of Brett Whiteley

Jigsaw Puzzle : Brett Whiteley Self Portrait in the Studio

Brett Whiteley
Self portrait in the studio

Deborah Bogle, The Australian, 'Art Movement', pg. 19-22, Sydney, 20 Jun 1992, 19-21 (illus.). This article appears in 'The Australian Magazine' a liftout of 'The Australian' newspaper. A photograph of Alan Lloyd, head of conservation at the Art Gallery of NSW, examining a detail of Whiteley's painting also accompanies this article. This photograph was taken by Andrew Rankin.

Nancy Borlase., The Sydney Morning Herald, 'Whiteley's year', Sydney, 27 Jan 1977, (illus.). This article appeared in the `Art' section of the newspaper. A detail of Whiteley's self portrait is accompanied with a photograph of the artist.

Richard Coleman., The Sydney Morning Herald, 'Doctor's theory may help self portraits', Sydney, 03 Apr 1981, (illus.). Dr. Virginia Keeney is photographed examining Whiteley's self portrait. This article appeared in 'The Arts' section, and Dr. Keeney discusses problems artists have when painting their own hands. Whiteley's self portrait is compared with Velaquez's of 1656, and Manet's of 1879.

Jane Fraser., The Australian, 'Tribute to Whiteley looks back with love', Sydney, 07 Jul 1992, 3 (illus.). Whiteley's daughter Arkie is photographed by Alan Pryke standing before his painting titled `Self portrait in the Studio'.

Leslie Hollings (Editor), The Australian, Sydney, 17 Mar 1979, (illus.). This is an advertisement for an art book titled `Brett Whiteley' by Sandra McGrath. This appeared in the `Arts' section of `The Australian Supplement'.

Leslie Hollings (Editor), The Australian, Sydney, 31 Mar 1979, (illus.). This is a repeated advertisement for an art book titled `Brett Whiteley' by Sandra McGrath. This appeared in the `Arts' section of `The Australian Supplement'.

Terry Ingram., The Australian financial review, 'Market may see "secret" paintings', Sydney, 14 May 1993, 7 (illus.). Terry Ingram discusses current art market, and valuation of Whiteley's work. Photograph of Whiteley's 'Self Portrait in the Studio' is taken "stored in the bowels of the Art Gallery of NSW", by Bruce Miller.

Rodney James., WARNING: Smoking has been linked to some of the most powerful images of the twentieth century, 'Come to where the flavour is, smoking, cigarettes + modernity', Mornington, 2006, (colour illus.). List of works.

Sandra McGrath., The Australian, 'The making of an authentic genius', Sydney, 24 Jan 1977, 8 (illus.). This article appeared in the 'Arts Australian' section of 'The Australian' newspaper. The editor of this section was Geraldine Pascall.

Sandra McGrath., The Australian, 'A prize collection', Sydney, 27 Oct 1978, (illus.). This is a review of an exhibition which consists of Archibald Prize winning paintings, that was held at

Sandra McGrath, Brett Whiteley, Detail of 'Self Portrait in the Studio' on cover page of book, Pymble, 1992, cover (colour illus.).

Wendy Owen., Age, 'Archibald and Sulman prizes scooped by Sydney artist; Whiteley wins the big double', Melbourne, 22 Jan 1977, 2 (illus.). This article appears in 'The Arts' section of the newspaper. This article was edited by Sally White.

Geraldine Pascall., The Australian, 'All the makings of a lovely brawl', Sydney, 21 Jan 1977, (illus.). This article analyses art prizes and their judges, and this year's entries in the Archibald, Sulman, and Wynn competition.

Sebastian Smee, The Australian, 'Smoking thrills', pg. 18-19, Sydney, 13 May 2006-14 Jun 2006, 18-19. 'Review' magazine. Review of 'WARNING: Smoking has been linked to some of the most powerful images of the twentieth century' exhibition, held at Mornington Peninsula Regional Gallery.

Philip McIntosh. Whiteley discussing his paintings at home in Sydney., Age, 'Portrait of the artist as a winner', Melbourne, 25 Jan 1977, 2. Written shortly after Whiteley's Archibald & Sulman prize win in January 1977.

Kristin Williamson., The national times: Australia's national weekly of business and affairs., 'Brett Whiteley - Portrait of a Genius', Sydney, 25 May 1980-31 May 1980, 28-32 (illus.). Robert Hughes, art critic for 'Time' magazine was quoted several times throughout this article. The illustration is a detail of Whiteley's 'Self Portrait in the Studio'.

unknown author., The West Australian, 'Controversy likely over art winner', Perth, 22 Jan 1977, (illus.). This article was written in regards to Whiteley winning both the Archibald, and Sulman prizes in 1977.

unknown author., The Sydney Morning Herald, 'Mirror image a winner for artist Whiteley', Sydney, 22 Jan 1977, (illus.). There are two illustrations of `Self Portrait in the Studio' in this article. One includes Australian artists John Olsen, and John Coburn examining Whiteley's Archibald prize-winning entry. At the time of print Olsen and Coburn were board members of the Art Gallery of NSW.

unknown author., The Canberra times, 'Sydney artist Brett Whiteley wins Archibald Prize', Ainslie, 22 Jan 1977, (illus.). This article is accompanied by a photograph of John Olsen looking at a section of Whiteley's prize-winning painting. John Olsen at the time of print was a board member of the Art Gallery of NSW.

unknown author., Adelaide News, 'Two top art prizes to Whiteley', Adelaide, 21 Jan 1977. This article refers to Whiteley winning both the Archibald and Sulman prizes in 1977. A photograph of a youthful Brett Whiteley also accompanies this article. 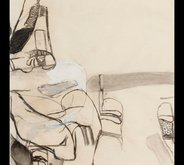