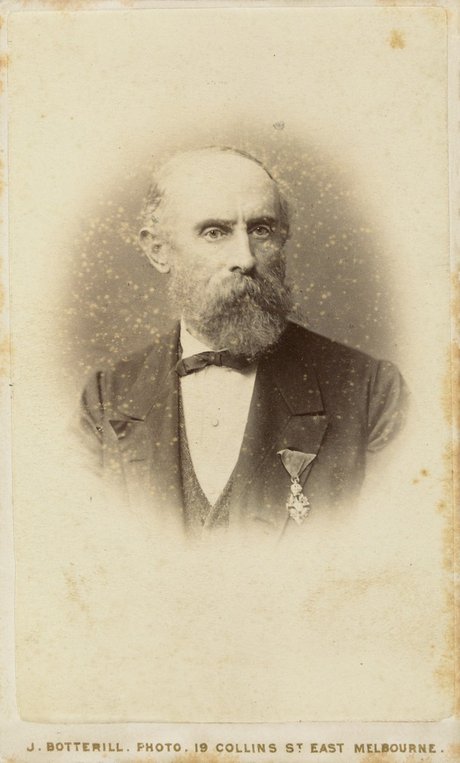 Eugene von Guérard is best known for his large-scale paintings of dramatic views of the Australian bush, painted in the romantic tradition of the sublime. He worked in the German landscape tradition, which suggested the presence of divine powers in nature, and his paintings were celebrated by critics for their technique and grandeur. He occupied an important place in the nascent artistic community in Melbourne as Master of Painting and curator of the National Gallery of Victoria.

Von Guérard was initially taught by his father, Bernhard von Guérard, a miniaturist at the court of Francis II in Vienna. From 1826 to 1838 the pair travelled extensively in Italy, where von Guérard studied in Rome. After his father’s death he trained at the Staatliche Kunstacademie in Düsseldorf, Germany, from 1839 to 1846. Lured to Australia by the commercial prospects of the gold rush, he immigrated to Victoria in 1852 and worked as a prospector near Ballarat. By 1854 he had settled in Melbourne and resumed his career as a painter.

With Melbourne as a base, von Guérard travelled frequently through Victoria in search of awe-inspiring scenes to draw and paint, producing dramatic landscapes of mountains and valleys such as Mount Abrupt, the Grampians, Victoria 1856. He also made trips to other colonies: Tasmania in 1856 and 1875, South Australia in 1855, New South Wales in 1859. He also visited New Zealand in 1876, where he made sketches for Milford Sound, New Zealand 1877-9. Von Guérard’s fascination with the natural world was also informed by contemporary science, particularly the influential work of Alexander von Humboldt. He accompanied the scientific expeditions led by AW Howitt (1860) and those led by Professor Georg Balthasar von Neumayer (1862) to Cape Otway and the Australian Alps, including Mount Kosciuszko, making many sketches of scenery which he later worked into paintings North east view from the top of Mount Kosciusko, New South Wales c1866. Von Guérard’s landscapes expressed his personal religious feelings, alluding to the divine powers in nature. His travels also resulted in lucrative commissions from wealthy country landowners for paintings of homesteads.

In 1870 von Guérard was appointed Master of Painting at the National Gallery School and Curator of the National Gallery of Victoria. While criticised for his outmoded techniques, which restricted students to copying artworks in the gallery’s collection, he continued in the post until 1881 when forced to retire due to ill health. He returned to Düsseldorf in 1881 with his wife and daughter and moved to London in 1891, where he remained until his death in 1901.

Other works by Eugene von Guérard