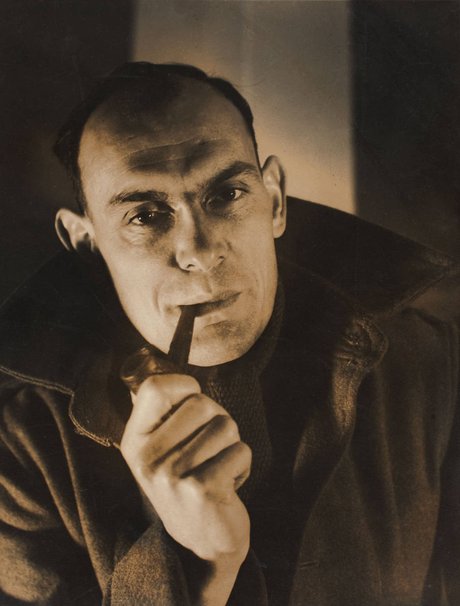 Frank Hinder was one of a small group of artists crusading for abstraction in Sydney during the 1930s. A founding member of the Contemporary Art Society in Sydney, he had a strong interest in cubist and constructivist principles, theories of dynamic symmetry, and philosophies of theosophy and anthroposophy.

Hinder received drawing lessons from his father, an amateur painter, before attending classes at the Royal Art Society of New South Wales under Antonio Dattilo-Rubbo in 1924. He toured Europe as a drummer with the Young Australia League brass band in 1925 where he was exposed early to modern art theories, before continuing his studies at Sydney East Technical College with teacher and sculptor Lyndon Dadswell.

In 1927 Hinder travelled to the United States, studying at the Art Institute of Chicago and then at the New York School of Fine and Applied Art (later known as Parsons) under Howard Giles and Emil Bisttram. From 1930 to 1931 he attended the Master Institute at the Nicholas Roerich Museum, a centre of art, science and spirituality, where he acquired the belief that art should serve to both advance civilisation and express the unity of existence. Here he was introduced to the formal language of cubism and Jay Hambidge’s theory of dynamic symmetry, which outlined principles of geometric proportion implying growth as opposed to static geometry. He also became acquainted with the work of Mexican socialist painters Diego Rivera and Jose Clemente Orozco, as well early-Renaissance artists including Piero della Francesca, whose techniques influenced what would become his medium of choice: egg tempera worked over pencil in quattrocento colours.

Hinder married the American sculptor Margel Ina Harris in 1930 and in 1933 they attended Bisttram’s summer school at Taos, New Mexico, an art-and-nature colony, where they were inspired by the landscape and its Native American culture. Dance of the Koshares 1933, considered the most complex work of his American sojourn, came out of the rain dance they saw at Santo Domingo Pueblo. A number of elements of his future development are present in this early work, which depicts a number of dancing nude figures within a semi-abstract composition.

Returning to Australia in 1934, Hinder painted with Grace Crowley, Ralph Balson and Rah Fizelle, bringing his knowledge of European and American abstraction to the group. He held his first solo exhibition in 1937 and produced a number of semi-abstracts, exemplified in Dog gymkhana 1939, which plays on the circular shapes of the umbrellas which weave through the crowd of dogs and their owners, demonstrating the artist’s attempts to create order out of chaos. In 1939 Hinder helped to found the Contemporary Art Society of New South Wales and to organise Exhibition I with Eleonore Lange, the first exhibition in Australia of art based on abstract principles. Other exhibitors were his wife Margel Hinder, Crowley, Balson, Fizelle, Lange, Gerald Lewers and Frank Medworth.

During the Second World War, he worked with the Australian Camouflage Unit, designing the ‘Hinder Spider’, a portable camouflage frame for soldiers. Hinder envisioned this project through an artistic lens, later explaining: 'My work… was connected with light, colour, tone, shadows, optical effects and illusions and so on – all for a very different purpose but nevertheless related to problems which concern the artist.’ He was posted to New Guinea, where he was lucky to escape from a burning plane crash that became a powerful subject for his art. Hinder translated the trauma he experienced from this incident into a series of small watercolours, culminating in Bomber crash 1943, which evokes the glorification of speed and mechanical energy embraced by the futurists.

After the war Hinder earned his living from theatre design, commercial art and teaching. He became a key Australian mid-century abstractionist, producing works such as Tram kaleidoscope 1948, a fragmented vision of an urban street in which time and space have become intrinsically intertwined. The cylindrical tram, distant buildings, a zooming car and crowd of anonymous commuters are integrated harmoniously into the composition, unified by a repetition of forms. Capturing the essence of Sydney modernism, this painting synthesises elements of cubism, futurism and orphism to form an ambitious statement of the city as a dynamic, living organism.

Hinder won the Blake Prize in 1952, and over the next decade assisted Margel on large sculpture commissions and in theatre work. In the latter half of the 1960s he became interested in light and movement and began producing luminal kinetics – extraordinary compositions made of aluminum, plywood, glass, plastics, tungsten lighting and motorised parts, influenced by the works of Ludwig Hirschfeld Mack and László Moholy-Nagy.

Hinder’s legacy to Australian art is a body of drawings and paintings remarkable for their rhythmic harmony, lyrical colour and sophistication of design. His work was featured in the exhibition Balson, Crowley, Fizelle, Hinder at the Art Gallery of New South Wales in 1966, and in a joint retrospective of Frank and Margel Hinder held at the Gallery in 1980.

Other works by Frank Hinder