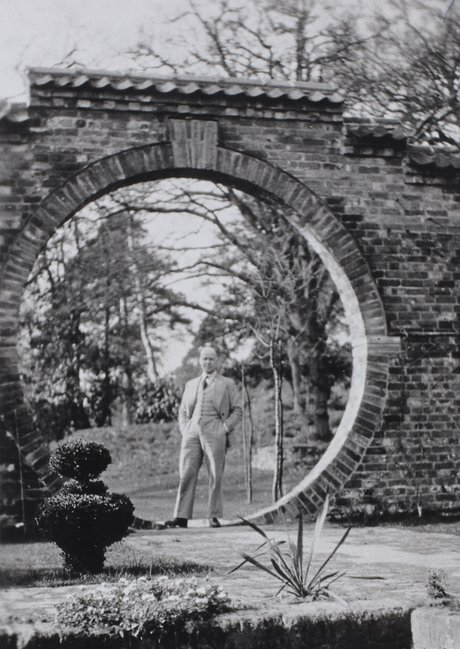 One of the pioneers of modern Australian painting, Roy de Maistre remains best known for his early collaborative experiments in colour and abstract form with Roland Wakelin in Sydney around 1918-19.

Studying initially at the Sydney Conservatorium of Music, de Maistre enrolled in classes with Antonio Datillo-Rubbo at the Royal Art Society where he produced works influenced by reproductions brought back from Europe by his teacher and fellow student Norah Simpson of European post-impressionists, including Vincent van Gogh, Paul Gauguin and Paul Cézanne. Following brief service in the Australian Army during the First World War, de Maistre was inspired by colour-therapy treatment given to shell-shocked soldiers, which led him to crystallise his theory of colour harmonisation based on analogies between colours of the spectrum and notes of the musical scale.

Enlisting Wakelin as a collaborator, he embarked on a series of experiments that culminated in the landmark Colour in art exhibition of 1919. The show featured small ‘colour orchestrations’, chromatic experiments based on correlations between hues of the colour spectrum and notes of the musical scale. Under the generative model of music, de Maistre and Wakelin created abstract paintings unprecedented in Australian art. These experiments developed into works of pure abstraction, the only extant example of which is de Maistre’s Rhythmic composition in yellow green minor, 1919. Visualising the sensation of slow unfolding music through colour movements, Rhythmic composition is also aligned with de Maistre’s search for spiritual meaning through abstraction, akin to other artists such as Vasily Kandinsky who were interested in the ideas of theosophy and anthroposophy, spiritualism and the occult.

The spiritual inflections of his search for abstraction through colour permeate de Maistre’s 1919 lecture, ‘Colour in relation to painting’, as revealed in the following extract:

What is colour? Many accept it unquestioningly – a few, I believe, are almost unconscious of its presence – for others it constitutes an aesthetic pleasure or an interesting scientific phenomenon – the result of light vibrations acting upon their optic nerves. But there are many for whom colour means far more than this – to them it brings the conscious realisation of the deepest underlying principles of nature, and in it they find deep and lasting happiness – for those people it constitutes the very song of life and is, as it were, the spiritual speech of every living thing.

In 1923 de Maistre was awarded the NSW Travelling Art Scholarship, spending time in London, Paris and St Jean de Luz, where he produced Sea piece, St Jean de Luz 1925, a coastal landscape that reflects a more tempered vision of his earlier experimentations with abstraction and colour. De Maistre turned to a more realistic (and more saleable) style of colour painting in his landscapes and genre works of the 1920s. These works nevertheless display a lush vitality, particularly in their portrayal of middle-class life, captured in Woman with parasol at Palm Beach, 1927, an elegant, colour-saturated solar homage to Sydney’s seaside culture.

Unable to make a living from his art in Australia, de Maistre emigrated to London in 1930, where he continued to develop his work along modernist lines, producing cubist-inspired subjects of increasing complexity, while retaining an interest in colour theories. Deriving from a photograph of the Duke of Windsor and Mrs Simpson honeymooning on the deck of their yacht, On the deck 1935, exemplifies his developing geometric-cubist style with the two figures abstracted in the centre of the composition, framed and isolated by lines and shadows formed out of solid curves of funnels, wires and gunwales that create areas of flat colour.

Perceived as a modernist of some note in England, de Maistre honed a style of academic cubism that influenced the young Francis Bacon. A major retrospective organised by the Whitechapel Art Gallery, London, in 1960, marks his recognition in the country where he remained for the rest of his life.

Other works by Roy de Maistre