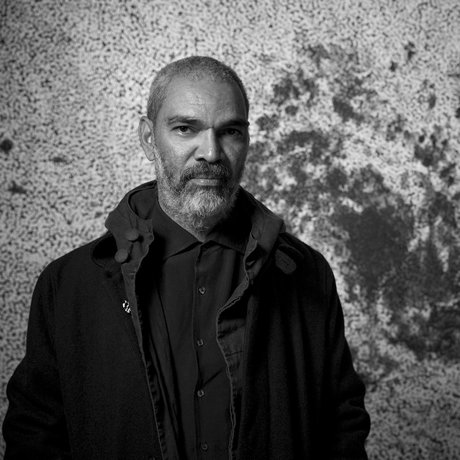 Daniel Boyd is considered one of Australia’s leading artists. A Kudjala, Ghungalu, Wangerriburra, Wakka Wakka, Gubbi Gubbi, Kuku Yalanji, Bundjalung and Yuggera man with ni-Vanuatu heritage, he now lives and works on Gadigal/Wangal Country, Sydney. His work reinterprets Eurocentric perspectives on Australian history and the ethics of colonisation by drawing from historic photographs, art-historical references and his own personal and cultural history.

Boyd first came to public attention in 2005 with his No Beard series of appropriated historical portraits. He has since developed a distinctive style of image-making, fragmenting the picture plane with the clear dots, or ‘lenses’, he applies across its surface. While still based on found source material, his recent works materially complicate our understanding of perception.

Born in Gimuy/Cairns in 1982, Boyd – the youngest of three siblings – took to drawing as a child. He began to sell illustrations and small paintings he made of the Gimuy reef to locals and tourists for pocket money, and soon his artistic talents caught the attention of his family. With their encouragement, Boyd studied art at the Australian National University’s School of Art & Design in Kamberri/Canberra, where he graduated in 2005. In his final year of art school, Boyd began the seminal No Beard series, which he exhibited in Polly Don’t Want No Cracker Neither, his first solo exhibition, at Mori Gallery, Sydney. The exhibition was considered a success with the National Gallery of Australia purchasing the entire show.

Originally, the No Beard series consisted of small oil-on-canvas works. The first that Boyd completed was Captain No Beard 2005, made in response to the 1782 portrait of Captain James Cook by John Webber, held by the National Portrait Gallery, Canberra. Humorously, the expression ‘no beard’ references an account of Cook’s first landing whereby the First Peoples’ assumed that he and his men were women due to their lack of facial hair.

As Boyd explored the nature of Australian history with other colonial ‘heroes’, his works grew bigger in size. Sir No Beard 2007, a portrait of Sir Joseph Banks in the Art Gallery of New South Wales collection, interrupts the narrative of his success and tribulation, exposing the roles that Banks and other men really played in subjugating Aboriginal people and their taking part in acts of piracy. Here the term ‘no beard’ evokes connotations with the legacy of Captain Blackbeard, the notorious English pirate who operated from 1716 to 1718.

In 2006, Boyd began to broaden his visual language, exploring the breadth of the circular forms that would eventually become his most well-known motif, referred to by the artist as ‘lenses’. These lenses, or clear, convex dots, spread across his compositions and are an intervention into the act of seeing. For Boyd, his technique is informed by Gestalt theory, the allegory of Plato’s cave, and the search for dark matter, where the unseen and the in-between carry meaning.

That same year, Boyd produced a series of works on paper titled Jesus Christ!, where he took a hole punch to reproductions of illuminated manuscript carpet pages, realigning the cut-outs on a separate sheet of paper. Later, Boyd exhibited a painted work, Jesus Christ! 2009, where for the first time his lenses completely covered the composition. Since this work’s exhibition, Boyd has approached all artworks – painting, drawing, videowork and installation – as an interlocked process of inscription and erasure.

In 2014, Boyd became the first Aboriginal and Torres Strait Islander artist to be awarded the prestigious Bulgari Art Prize, administered by the Art Gallery, for Untitled (PW) 2014. This major work represents the culmination of several years of exploration by the artist in interrogating the shared experiences of colonisation felt by First Peoples across the Great Ocean (the Pacific). In particular, Boyd had spent the previous year recreating found images of his kin from Vanuatu being ‘blackbirded’ – a term given to the kidnapping and forced enlistment of people from the Great Ocean region to serve as labourers in Australia and elsewhere.

Untitled (PW) exposes this aspect of Australian history, and explores Boyd’s tenuous attachment to the country of his Ancestors. Veiled in transparent dots, the view of Country is partial, incomplete, like the recording of history. The work’s reduced palette stands in stark contrast to typically colourful depictions of carefree island life. It may be seen to allude to the sadness of past events and the personal implications they have for Boyd in the present.

Other works by Daniel Boyd