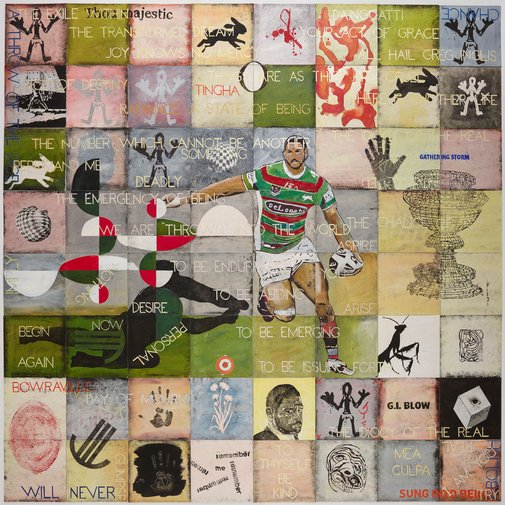 ‘I was recently delighted to learn that Tracey Moffatt follows the South Sydney Rabbitohs (co-owned by Russell Crowe). I have also been a supporter since 1965, when as a 15-year-old I attended the legendary grand final between South Sydney and St George. To witness Greg Inglis in full flight, equipped with a fend that could stop a freight train, is to see poetry in motion. Thou majestic!’

‘But there is far more to Greg Inglis than being an elite Indigenous athlete. He is a hero and role model to Indigenous communities all around Australia, and a community leader of enormous influence. His great act of grace is to engage with these communities. He teaches children and adolescents how to avoid drugs, alcohol and violence and how to adapt to the many other challenges that these disadvantaged children and adolescents face. Every human being is the greatest work of art ever created.’

‘He brings hope and a sense that anyone, despite everything, can be master of their own destiny. All hail Greg Inglis!’

This is the sixth time Imants Tillers has been an Archibald finalist. He won the Wynne Prize in 2012 and 2013.