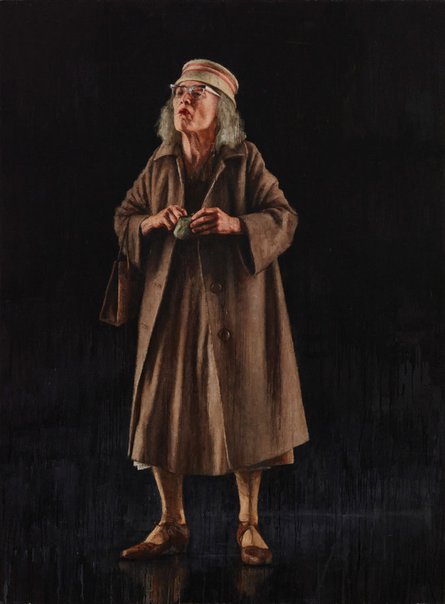 In 2014, Jude Rae was an Archibald finalist with a portrait of actor Sarah Peirse. Their friendship began almost a decade ago when Peirse bought one of Rae’s drawings.

‘I have seen Sarah in a variety of theatre productions, each time witnessing the mysterious transformation that occurs when she is working. I suggested the portrait after seeing her as Miss Docker in the Sydney Theatre Company production of Patrick White’s A cheery soul last year. I was interested in painting an actor “in character” because it raises all sorts of questions about identity, authenticity and the representation of the self,’ says Rae.

‘The play follows Miss Docker’s rejection by a society that has lost faith in the church and is riven by fear. She is both awful and pathetic: an ageing, damaged woman orphaned as a child and newly homeless – all issues that have particular currency today.’ The painting takes the form of a homage to Velázquez’s Portrait of Pablo de Valladolid (c1635), a buffoon or court jester to Philip IV of Spain.

Born in Sydney in 1956, Rae studied Fine Art (History) at Sydney University. She won the Bulgari Art Award in 2016. In 1983 she was the subject of an Archibald Prize portrait painted by her father David Rae.

Highly commended in the Archibald Prize 2019