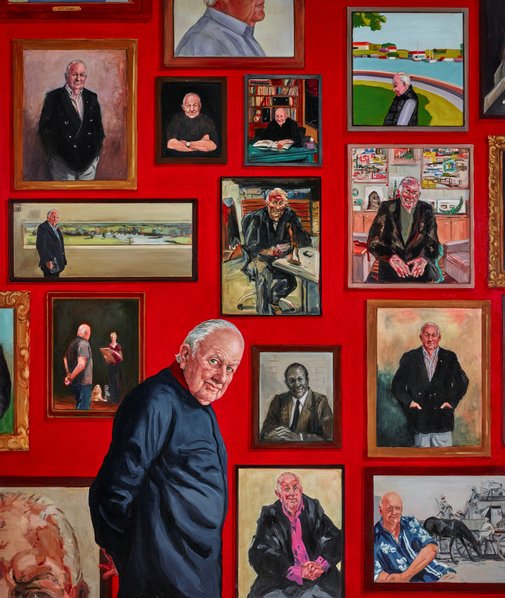 Joanna Braithwaite’s subject is Pat Corrigan, a businessman, art collector and philanthropist. ‘A well-known figure in the Australian art world, he is renowned for his knowledge, generosity and his cheeky, charming persona,’ says Braithwaite.

‘I wanted to paint Pat because it fascinates me that although he is regularly painted by established artists for the Archibald, he has never been painted by a woman before.

‘I decided to paint Pat in front of a selection of the many portraits that have been created of him over the years. The earliest image is a black-and-white photograph by Max Dupain. The other artists whose works are clearly shown, top left to bottom right, are: Paul Newton, Adam Knott (photograph), Anne Zahalka (photograph), Michael Muir, Peter Smets, Euan Macleod, Alan Jones, Paul Newton, Nicholas Harding and Nigel Thompson. I also included a self-portrait with Pat in my studio, which is over his shoulder. The red wall is a nod to China, where Pat was born and spent some formative years. So here is Pat the collector with a collection of Pat portraits.’

Born in the UK, Braithwaite now lives in Sydney. A seven-time finalist in the Sulman Prize, this is her third time in the Archibald Prize.

The portrait is now in the collection of Macquarie University.