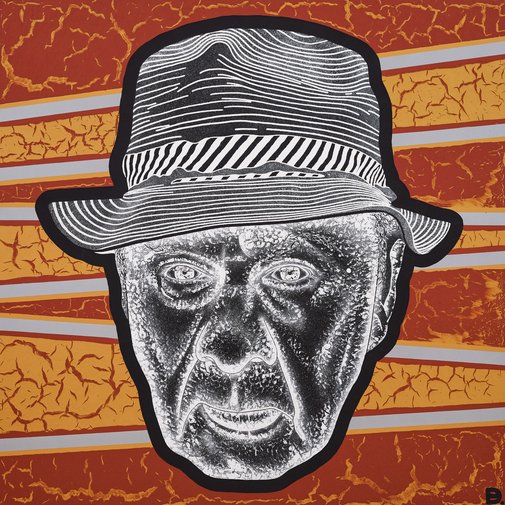 Blak Douglas’s subject is Uncle Roy Kennedy, a celebrated Wiradjuri artist, renowned for his naive-style depictions of his mission upbringing.

‘Raised on Warangesda Mission (Darlington Point Reserve) on the Murrumbidgee River, Roy holds vivid memories of his years there. He has confided those stories to me over the course of a decade. As my surrogate grandfather, Roy and I have forged a relationship that embodies much to do with “kultcha” versus modern-day culture. We meet weekly and chat until the cows come home,’ says Douglas.

‘Given Roy’s past practice as an etching printmaker, I wished to honour this by depicting him in monotone. This is completely new to me and was much like attempting to speak a foreign language. Metaphorically though, I saw a spiritual man who now lives a lifestyle that is the polar opposite of his mission upbringing. Aesthetically, I’ve used a cracked acrylic surface – my trademark – around his face in the ochre colours of the earth. This represents the hardness of a man forged from an ancient past whilst living within a fractured present.’

Born in 1970 to an Aboriginal father of the Dhungutti people, and an Irish-Australian mother, Douglas lives and works in Redfern. He was also an Archibald finalist in 2015.