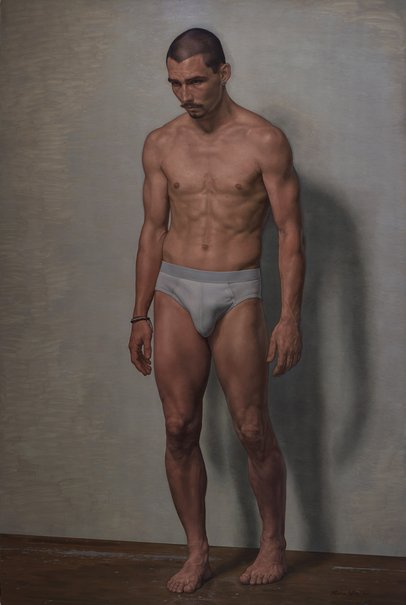 James Batchelor is an award-winning dancer, choreographer and filmmaker from Canberra whose work combines movement and visual arts. He has worked with some of Australia’s leading dance companies and artists including Chunky Move, Tasdance, Sue Healey and Antony Hamilton.

The title of Marcus Wills’ portrait refers to one of Batchelor’s early works, Ersatz, a performance installation and film series created with international and digital media artists.

‘Reduced to minimal elements of just a subject in the studio, the portrait is related to some of my previous paintings of the model in the studio, a particular focus being the body in motion,’ says Wills.

‘Normally, as a dancer, he would be moving but I liked the idea of painting James as if he is about to launch into something, a moment of arrested movement that I hoped would create a tension as we anticipate what will be his next motion.’

Born in Kaniva, Victoria, in 1972, Wills has a Bachelor of Fine Arts from the Victorian College of the Arts and was awarded the Brett Whiteley Travelling Scholarship in 1999. A figurative realist painter, he has also been a finalist in the Sulman Prize (2003, 2010 and 2013) and the Wynne Prize (2010). He won the Archibald Prize in 2006 and was a finalist last year.

Highly commended in the Archibald Prize 2016