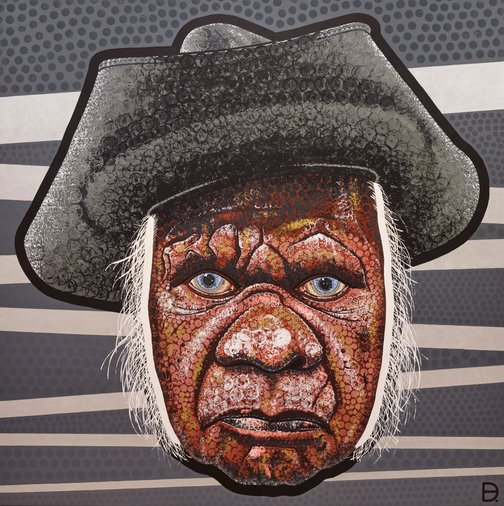 ‘I recall seeing him for the first time, a decade ago, at a launch in Ashfield. His introductory catch phrase was: “My name’s Uncle Max Eulo and I’m from Bourke, where the crows fly backwards”. Thereafter, I’ve seen Uncle Max at most Indigenous events, cleansing the scene with his coolamon (dish) and smoking gum leaves. I thought this lovely man should be portrayed not only because of his prepossessing face but the fact that he has become one of the most recognised artistic celebrities within the public performance arena. Where there’s smoke, there’s Uncle Max.’

Douglas was born Adam Douglas Hill on Dharug Country (Blacktown) in 1970 to an Aboriginal father and Australian mother. Connected to a family of artisans, he later studied photography, illustration and graphics at the University of Western Sydney Nepean. A largely self-taught artist, working in the genre of modern pop art, his work is now widely collected nationally and internationally and is held by the National Gallery of Australia, National Museum of Australia, National Maritime Museum, NSW Parliament, Taipei Museum and Aboriginal Art Museum of Utrecht.

He is elated to be the first identified Dhungatti Aboriginal artist to have been selected as a finalist in the Archibald Prize.