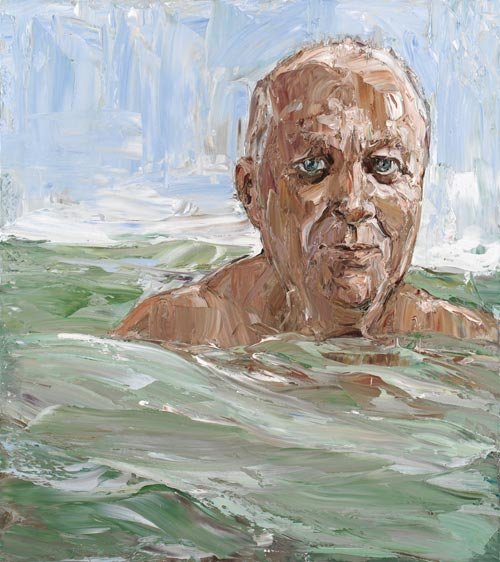 Nicholas Harding has been an Archibald finalist every year since 1994. He won the Archibald Prize in 2001 with a painting of actor John Bell as King Lear and was highly commended in 1998 for his portrait of artist Margaret Olley. Last year his portrait of artist Bob Dickerson doing his daily laps in his swimming pool was highly commended and won the People’s Choice. This year Harding is also the subject of Paul Ryan’s Archibald portrait.

Award-winning writer Robert Drewe is the author of novels including The drowner, Our sunshine and Grace, a collection of short stories called The bodysurfers, and a memoir called The shark net, which was adapted as an ABC-TV series. He also edited The Picador book of the beach. Drewe opened an exhibition at Rex Irwin’s Gallery last year called The sea and Drewe’s speech illuminated aspects of our inhabitance of the coast, which related to a series of coastal and beach paintings Harding was working on. ‘There was a synchronicity in what Robert was saying and what I was painting,’ says Harding. On a family holiday to northern NSW, where Drewe now lives, their two families met and Harding did some drawings of the author.

This is Harding’s third attempt at a portrait of Drewe. The first two were set on the beach. ‘The first was reasonably successful but I pushed it too far and it became overworked,’ says Harding. ‘The second was awful. During the last drawing session, I asked Robert about new projects. He loves bodysurfing and he said that he’d been in the surf and the idea for a new novel just dropped into his head. I bodysurf myself and the light on the water has a wonderful way of illuminating form, and this confluence gave me the direction to take with the portrait.’

Born in London in 1956, Harding came to Australia in 1965. He worked as an animator, illustrator and painter, becoming a full-time painter in 2000. He has had regular solo exhibitions in Sydney, Brisbane and Melbourne. He has been in numerous group shows including the Dobell Drawing Prize (winning in 2001), the Wynne and the Sulman prizes, the Doug Moran National Portrait Prize and the Kedumba Drawing Award. His work is held in Australian and overseas collections including the Art Gallery of New South Wales.