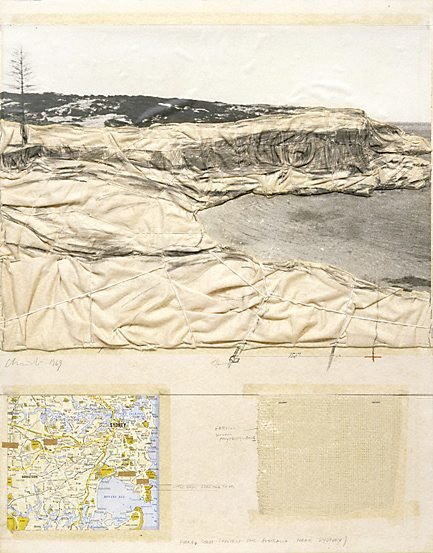 Little Bay, property of Prince Henry Hospital, is located 14.5 kilometres, southeast of the centre of Sydney.

The South Pacific Ocean cliff-lined shore area that was wrapped is approximately 2.5 kilometres long, 46 to 244 metres wide, 26 metres high at the northern cliffs, and was at sea level at the southern sandy beach.

90,000 square metres (1 million square feet) of erosion-control fabric (synthetic woven fibre usually manufactured for agricultural purposes) were used for the wrapping. 56.3 kilometres of polypropylene rope, 1.5 centimetre diameter, tied the fabric to the rocks. Ramset guns fired 25,000 charges of fasteners, threaded studs and clips to secure the rope to the rocks.

Ninian Melville, a retired major in the Army Corps of Engineers, was in charge of the workers at the site.

17,000 manpower hours, over a period of four weeks, were expended by 15 professional mountain climbers, and over 100 workers: architecture and art students from the University of Sydney and East Sydney Technical College, as well as a number of Australian artists and teachers. All workers were paid, with the exception of 11 architecture students who refused.

The project was financed by Christo and Jeanne-Claude through the sale of Christo's original preparatory drawings, collages, scale models, early packages and wrapped objects of the 1950s and 1960s and lithographs.

The coast remained wrapped for a period of ten weeks from 28 October 1969. Then all materials were removed and recycled and the site was returned to its original condition.