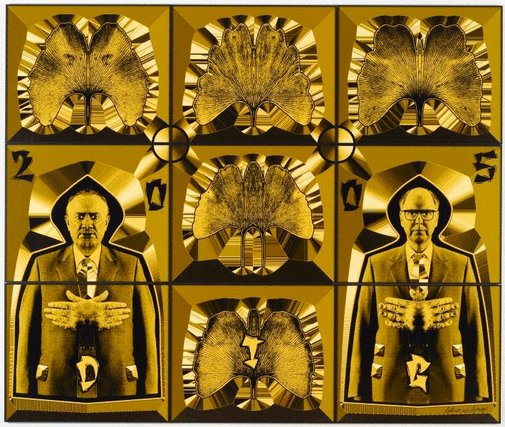 Gilbert & George live and work in the East End of London where they make their photo works using themselves and young men of the neighbourhood as subjects. They insist on the accessibility of their art which is presented in very bright graphic form like advertising and has a content that is everyday and usually overtly sexual.

‘Dig’ is one of 25 works from the series ‘Ginkgo pictures’ created for their solo exhibition in the British Pavilion at the 2005 Venice Biennale. This series is named after the ‘Ginkgo biloba’, or Ginkgo tree, the leaves of which are a leitmotif that links all the works in the series. The ginkgo leaf is known for its symmetry, with one side mirroring the other and this is reflected in the halving and doubling of imagery in the Ginkgo pictures. Inevitably, many critics have drawn an analogy between the ‘Ginkgo pictures’ and the artists themselves – their doubling sameness, the two parts that make the one artistic entity ‘Gilbert & George’.1 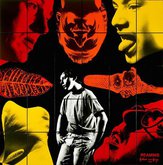