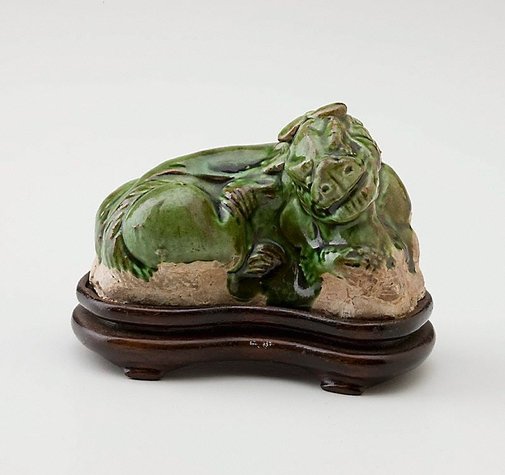 Small hollow moulded figures of animals are a common feature of Tang funerary art. Some were animals native to China, some were imaginary, fantastic creatures, and others such as the lion were animals introduced to China.

The coiled feline, with a paw scratching an ear, is one of the most common motifs in the sculpture and decorative arts of the eighth century. Comparative pieces in ceramic, jade, and stone are known.

China first became acquainted with the lion in the Han period through its contact with the West. In the ancient Mediterranean and Near Eastern world the lion, because it was the largest predator and most powerful and dangerous of all creatures, had become a universal symbol of power, often royal power. The Chinese adopted the lion and its symbolism into the 'mingqi' repertoire, and it even appears as large scale stone guardians of the spirit path to some tombs. The lion was also adopted by Buddhism, figuring as the defender of law and the protector of ancient buildings from whence developed the tradition of placing a pair of lions at the entrance of buildings.