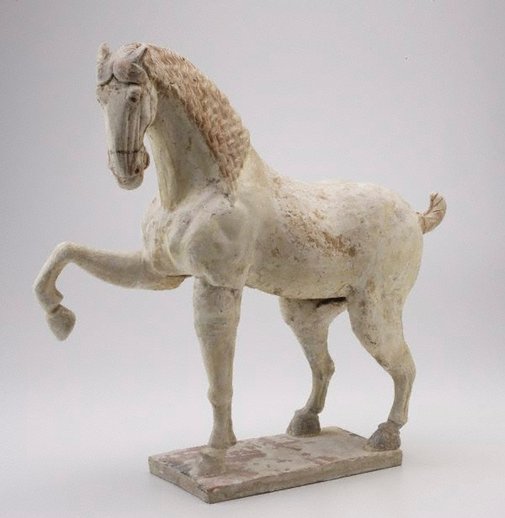 In 128 BC the mission of the Chinese Jang Chian to the west took him to the Persian provinces of Sogdiana and Ferghana where he discovered a breed of horse superior to the Mongolian ponies in common use in China. During the following century this new breed was introduced to China with great success. These highly-strung, noble horses which "sweated blood" were distinguished by their long legs, bony chest and nervous muzzle. The prestige of the western horses made them the status symbol of rich and official families, and as such, from the time of their introduction through to the Tang, they were a popular subject for tomb furniture. In figures such as this can be seen the Tang potters interest in realistic representation. One interesting peculiarity is that the horse's head always either looks straight ahead, or is turned to the left. For some so far unexplained reason, the head is almost never turned to the right. (This is also a feature to be noted among camels.)

Very few horses are known with the crenellated mane seen on this one. All those that are known have the same pose of raised right foreleg and head turned to the left. This piece has been restored, but an interesting feature is that the three standing legs, while obviously from the same set of moulds as the upper part of the body, are of different clay.