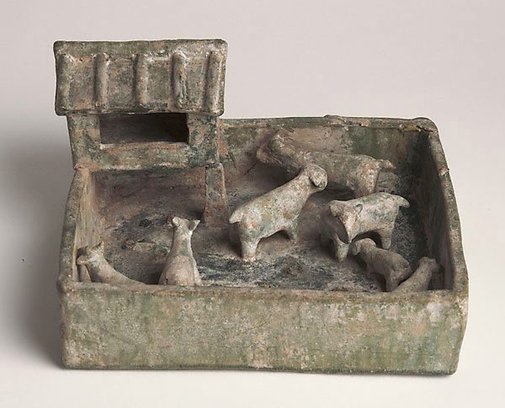 Another category of Han 'mingqi' are the realistic models of watchtowers, barnyards, grain mills and countless other objects of similar type, that tell us much about the architecture and the military and agricultural life of the time. This delightful model of a rectangular goat pen with an elevated fodder storage shed with external steps graphically depicts an everyday scene of nearly 2,000 years ago. Technically the piece is typical of one type of Han funerary ceramic: the low-fired earthenware covered with a green lead-silicate glaze that has taken on a silvery iridescence from burial in the ground.

The history of pre-Han lead glazing in China is obscure, the technique not coming into use before the second half of the first century BCE, and considered by some to have been used to imitate the patina of old bronze (Watson, W., "On T'ang soft-glazed pottery" in 'Colloquies on Art and Archaeology in Asia No. 1', London, Percival David Foundation of Chinese Art, second edition 1976. p. 41). Because lead glaze is toxic, glazed wares were used only as tomb furnishings and were not for general household use. This piece compares well with a goat pen in the Avery Brundage collection, which was excavated from the Han city of Jangsha (Changsha).