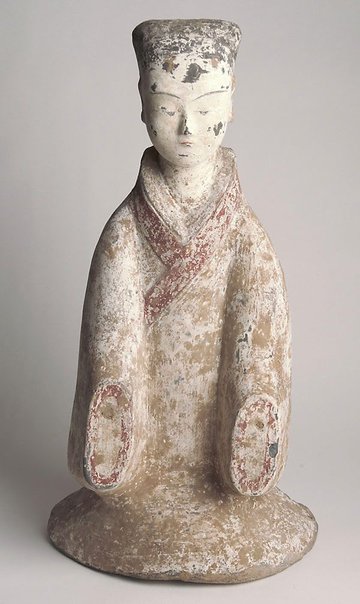 Because of the Chinese custom of burying with their dead pottery models of the living beings and objects by which they had been surrounded in their lifetime, we know a lot about Han culture and civilization. These pottery models, known as 'mingqi', served as substitutes for the real people and animals which had been sacrificed in earlier times and also for precious objects made of bronze, gold and silver. The mortuary culture flourished from the late Zhou dynasty to the middle of the 8th century when civil war and economic depression prohibited expensive funerals.

The use of 'mingqi' was sanctioned by Confucius (551- 479 BCE), the founder of China's ethical tradition, as part of the duties of filial piety ('xiao') and devotion to one's parents.

It was only in the 20th century, through the enthusiasm of foreigners who went to China, that mortuary figures came to be regarded as collectors' pieces. In China, the scholars were the traditional arbiters of taste and their interest lay in ancient bronzes, jades, Buddhist sculpture and painting. 'Mingqi', admittedly through their inauspicious associations with death, were not considered worthy of collecting although their existence was known. This situation was changed with the arrival of foreigners whose companies had been invited by the government to create a network of railways throughout China. When the railway gangs reached Xian and Luoyang they cut straight through the huge necropolis that surrounds the twin capital cities of the Tang dynasty. The 'mingqi' thus unearthed caught the fancy of the foreign engineers who sent back pieces to Europe. Soon a fashion came into being and a foreign market was established - less than 10 years later forgeries of 'mingqi' were appearing on the market ('The Chinese Exhibition', Melbourne, Australian Art Exhibitions Corporation, 1977. p. 16).

This large figure (pair with EC19.1962) is characteristic of Han mortuary figures of the "metropolitan" style: clear, uncluttered volumes decorated with white slip and paint. This style of figure dominated mortuary figures until the downfall of the Han empire when different regional styles began to proliferate. The figure's wrists have been broken off. Holes for the insertion of the hands which were made separately, can be seen in the figure illustrated.