View of Sydney from the west side of the cove, no. 2 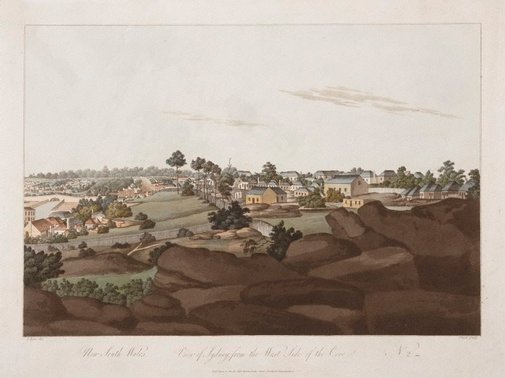 John Eyre was born in Coventry, England and transported to Sydney on 14 December 1801, after being convicted of house-breaking in March 1799. In June 1804 he was granted a conditional pardon, and was appointed by Governor Bligh in 1807 to condense three charts of Port Dalrymple (Launceston) into one. It was during this time that he met David Dickinson Mann.

These prints are two of four aquatints issued as a set, commonly known as the 'Eyre views', which when joined form a panorama. They were first issued, hand-coloured, in 1810 (although uncoloured versions are extant). They were re-issued in 1811 in two forms, to accompany Mann's 'Present Picture of New South Wales'. In the cheaper version (at £3 13s 6d), the images were printed on un-watermarked paper with centre-folds in a bound atlas; in the more expensive version (at £4 4s), as a portfolio of four unbound prints to accompany the text (from which this print is most likely to have come). Mann, a pardoned convict, had taken Eyre's original drawings to England in 1809, where they were displayed publicly. His book is a personal history of the colony from 1799 to 1808 under the Governorships of Hunter, King, Bligh and Johnston. Watermarks on some prints suggest it was re-issued in the 1820s. Facsimiles were published by William Dymock in Sydney in 1884 and another, combining 'The West side of the cove No 1 and No 2' in the late 1890s and another by Walter Akhurst and Co., Sydney

Many features of the early settlement are identifiable - for example, High Street (now George Street) is clearly visible. Other features, such as the buildings in the mid-ground to the right of centre, seem to be the invention of the engraver as they do not appear in any known drawing of the site.

John Clark , after John Eyre
View of Sydney from the west side of the cove, no. 2

Browse other works by John Clark

Browse other works by after John Eyre