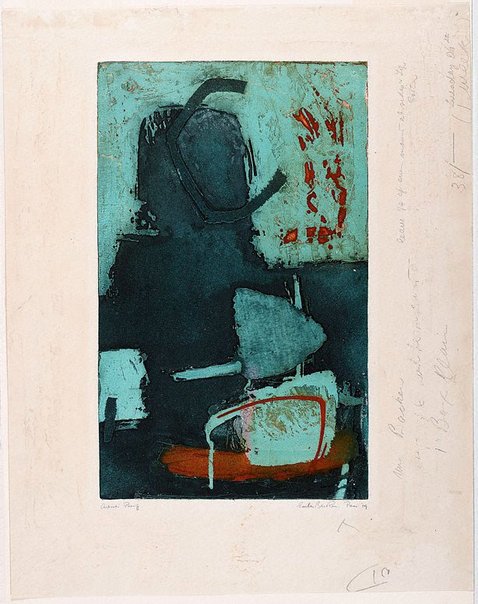 Earle Backen was born in Albury, NSW and grew up in Wagga Wagga. He studied at the Dattilo Rubbo Art School and at the Julian Ashton Art School under John Passmore in 1954. He was awarded the NSW Travelling Art Scholarship, which allowed him to study in London at the Slade School and Central School under Mervyn Peake and Keith Vaughan 1954-55. In 1956 he studied at La Grande Chaumière where he saw the work of the American abstract expressionists for the first time. After meeting friends at S W Hayter's Atelier 17 in Paris, he stayed on as a student for the next three years. Saeta in green utilises Hayter's methods, rolling on colour from a single plate at different levels and viscosities of ink; it was printed by the artist in Paris.

Backen returned to Sydney in 1959; his prints of the early 1960s reflect the work he had been doing in Paris, although he continued to experiment with additional techniques, including photo-etching. He was a foundation member of the Sydney Printmakers group. Three of his colour etchings were included in the Gallery's touring 'Australian Print survey' of 1963-64. In 1964 he began teaching at the National Art School (East Sydney Technical College) where he set up etching classes and later at the Alexander Mackie College, Sydney. He retired from teaching in 1987 but had stopped making prints in the late 1970s, concentrating on painting in oil and watercolour.

Browse other works by Earle Backen