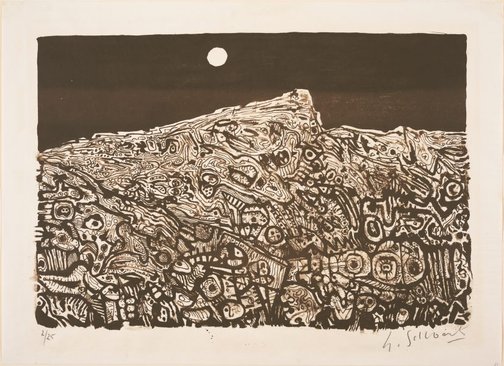 Udo Sellbach was born at Köln, Germany and studied at the Kölner Werkschulen under Alfred Will from 1947, graduating in 1952 as a Meister Schuler. He established the Kölner Presse in 1952 in association with the Gallerie der Spiegel, where he editioned artists' lithographs. In 1955 he emigrated to Australia with his wife, printmaker Karin Schepers, settling in Adelaide. Together with Jacqueline Hick, they established the first printmaking course at the South Australian School of Art, and in 1961 he formed the South Australian Graphic Society , the first society in the state devoted to prints, for which he was Treasurer and Barbara Hanrahan President. 'Landscape' was exhibited in the Gallery's 1963-64 national touring exhibition 'Australian Print Survey' (72). It was printed by the artist from stone in Adelaide. The following year he spent overseas after the breakup of his marriage, before returning to Melbourne to commence working at RMIT, where he taught from 1965-70. While in Melbourne in 1965 he was instrumental in the establishment of the Print Council of Australia with Ursula Hoff and Grahame King. He was later the Head of both the Tasmanian and Canberra Schools of Art, taught at the Queensland College of Art, and was a foundation member of the Visual Arts Board of the Australia Council.

Browse other works by Udo Sellbach

Udo SellbachUntitled from the Nightwatch series 1990330.1991