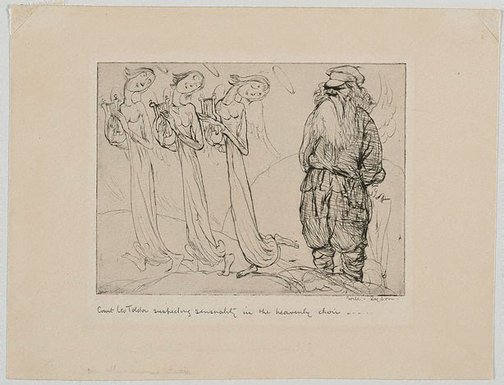 Will Dyson moved to England in 1909 and rapidly became established as a major illustrator and cartoonist, associating with many of the leading political, journalistic, literary and artistic figures of the day. He developed a formidable reputation for fearless and biting social and political commentary in his work, and well known for his wit and prowess as a speaker. Dyson's experiences observing Australian servicemen on the battlefields of France during the First World War and the premature death of his much-loved wife Ruby Lind (sister of Norman and Lionel Lindsay) precipitated a move back to Australia in 1925, but it was not permanent and eventually he returned to England, via America, in 1930.

Dyson first made drypoints in Australia from about 1928. He had earlier drawn cartoons on the subjects of 'Our Psychoanalysts', 'Finance' and various literary themes, but the drypoints developed these further with his characteristic insight and wit. By 1929 Dyson had made nineteen prints illustrating '… the pretensions and affectations of the intelligentsia … the extravagances of social life and the sterile gropings of impotent modernists in art, music and literature'. He took the drypoints with him on his return to England, exhibiting thirty nine of them in a sell-out show in New York in 1931, including both 'Dr Freud introduces a patient to her subconscious' and 'Count Leo Tolstoi suspecting sensuality in the heavenly choir'.