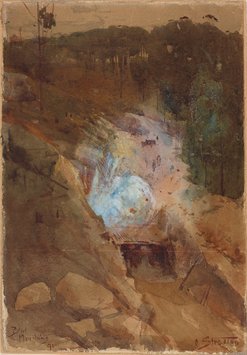 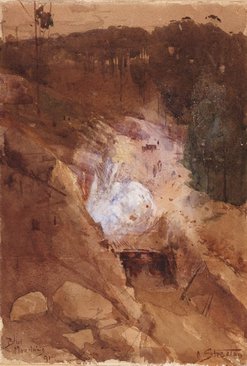 In late 1891, Streeton spent about 2-3 months living at Glenbrook, in the Blue Mountains, when he painted his iconic masterpiece, 'Fire's on' (Art Gallery of New South Wales collection). 'Fire's on' was the cry of the workers, who were cutting a railway tunnel through the mountains at Lapstone, just before a blast was detonated.

The tunnel project was a major feat of engineering and was at the time considered 'one of the greatest wonders of the colony - perhaps it may be said - of the world' (Josiah Hughes, 'Australia revisited in 1890', quoted in Jane Clark and Bridget Whitelaw, 'Golden Summers: Heidelberg and beyond', International Cultural Corporation of Australia and National Gallery of Victoria, Melbourne, 1985, p 140). Streeton wrote with great enthusiasm of his time there spent painting, observing the work and the workers themselves. What a boom of thunder shakes the rock and me. It echoes through the hills and dies away 'mid the crashing of tons of rock; some lumps fly hundreds of feet sometimes and fall and fly everywhere among the trees; and then a thick cloud laden with fumes of the blasting powder (Streeton to Frederick McCubbin, October 1891, see 'Golden Summers' p 140)

This watercolour gives the impression of having been executed quickly en plein air, capturing a dramatic moment. The landscape is notational, with the trees in particular having elegant fluidity. The picture plane is compressed, the palette limited and relatively subdued (possibly suggesting it was painted at a different time of day). There is a strong focus on the moment of the blast, with a flurry of opaque white pigment at the centre of the composition, capturing the energy of the explosion as it detonates from the rock face.

Sketch for Fire's On

pencil, watercolour, opaque white on ivory wove paper on board

Jane Clark and Bridget Whitelaw, Golden summers: Heidelberg and beyond, Melbourne, 1985, 140. general reference by the artist to 'two watercolour gems'