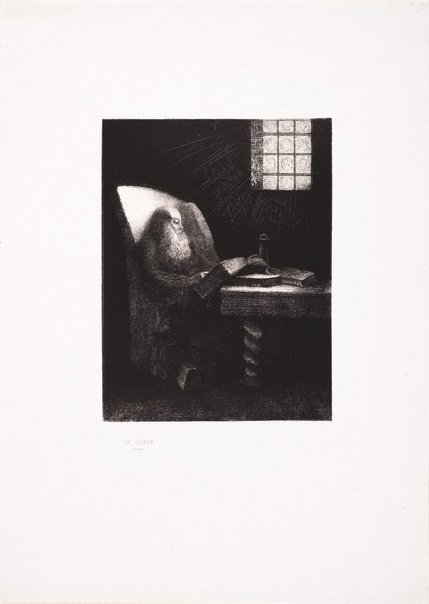 Redon began taking drawing classes in his native Bordeaux at the age of 15 before training to become an architect to please his parents. In Paris in 1864 he joined the studio of the academic painter Jean-Léon Gérôme, but the experience was not congenial and Redon returned to Bordeaux for a few years. There he met Rodolphe Bresdin, a struggling artist some 20 years his senior, whose influence on Redon’s artistic evolution was instrumental. Bresdin showed his pupil the rich possibilities of working in black and white, and initiated him into the wonders of etching and lithography. As well as being a printmaker, Redon worked as a draughtsman, pastellist and painter. He was also a talented and original writer, with a selection of his work published posthumously by his family under the title A soi-même (To myself).

In the 1880s Redon was adopted by the literary-artistic movements of Symbolism and Decadence, but he maintained a discreet distance from their theories. His works are nonetheless products of a visionary sensibility, treating mysterious, fantastic and macabre themes, the suggestive character of which was recognised by Henri Béraldi in the 11th volume of his dictionary of 19th-century engravers published in 1891, in which he describes Redon’s creations as ‘mystical hallucinations, fantastical and enigmatic, absolutely indecipherable for ordinary mortals’.

Redon initially made highly original finished charcoal drawings, which he called his ‘blacks’. Later, encouraged by Henri Fantin-Latour, he became deeply involved in lithography, publishing his first series of prints, Dans le rêve (In the dream-world), in 1879. Lithography was not only a way of making his ‘blacks’ available to a wider audience of collectors, it was also a medium of unique expressive potential that appealed to the artist. In 1913 Redon wrote:

It is above all in the lithographs that those blacks have their integral brilliance, unalloyed, for the charcoal drawings which I made before them and since, were always made on paper tinted with pink or yellow, sometimes blue … Black should be respected. Nothing prostitutes it. It does not please the eye and does not awaken sensuality. It is the agent of the spirit much more than the splendid colour of the palette or of the prism … All my prints, from the first to the last, were nothing but the fruit of curious, attentive, anxious, and passioned analysis; of what power of expression could be contained in a greasy lithographic crayon, with the aid of paper and stone. I am astonished that artists have not further expanded this simple and rich art, obeying the most subtle impulses of sensitivity … It challenges and makes the unexpected appear.

Redon published his prints both as single sheets and in album form. His series were often based on literary works, and illustrate authors such as Gustave Flaubert, Charles Baudelaire and Edgar Allan Poe. Indeed, his strongest admirers and closest friends came from the literary confraternity and included Joris-Karl Huysmans and Stéphane Malarmé.

Redon scorned naturalism in art and was critical of the Impressionists – ‘parasites of the object’, as he called them – notwithstanding his own recourse to the natural, objective and observable:

After the endeavour of minutely copying a pebble, a blade of grass, a hand, a profile or an entirely different thing from living or inorganic life, I feel a mental ebullience coming. Then I have the need to create, to let myself go to the representation of the imaginary. Nature, thus measured and infused, becomes my source, my yeast, my ferment.

The reader is Redon’s homage to the imaginative art of the past he most admired. It is based on the etching St Jerome in a dark chamber by Rembrandt, an artist whom Redon felt ‘gave moral life to shadows, just as Michelangelo gave it to sculpture’. The rays penetrating the window resemble cobwebs or fine cracks, heightening the spectral aura.

The seated figure is often said to be a portrait of Bresdin, developed from drawings completed in the 1860s. More generally, the print can also be seen as an evocation of Redon’s belief in the importance of reading, and of the enrichment of inner life that this surrogate experience offers to those who cultivate submission to what an author has to say. ‘Reading’, Redon said, ‘modifies us, perfects us. It allows this speechless and tranquil colloquy with the great spirit … who has bequeathed to us his thoughts’.

‘What’, Redon pondered, ‘did they do to cultivate their spirit when there were no books? They looked at the universe and at the earth. And, in the reading of this work, men formulated the most moving chapter.’

only state, edition of 50

Browse other works by Odilon Redon