In Deborah Kelly’s collage works, found images are entangled in cacophonous compositions that re-write the archive. Often oriented as a feminist critique of entrenched patriarchal perspectives, Kelly uses found images to tackle and subvert the way women have been imaged historically. Across various bodies of work, Kelly has rerturned again and again to the mythological figure of Venus, the Roman goddess of love. In Kelly’s various versions of the iconographic female, images from magazines as well as artworks and historical artefacts are woven together to form composite portraits of this ‘ideal’ woman. As carnivalesque, surreal imaginary beings, these hybrid bodies undo the very notion of idealised womanhood as both an absurdity and an impossibility.

Indelibly tethered to the depiction of the female nude in Western art, the representation of Venus as a vessel for the projection of desire has helped shape the pictorial lineage of the patriarchal gaze. Less a desiring subject than a conduit for the desire of others, Venus, and the nude in general, is often stripped of agency. Kelly turns this sublimation on its head, introducing new ways of looking at the bodies depicted in her source material and radical ways of reading the eroticism they convey. Kelly’s composite women take charge of their own bodies; they are expressive and exultant and exist on their own terms. 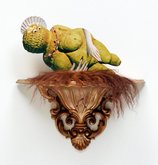