The New Egypt The Old Egypt 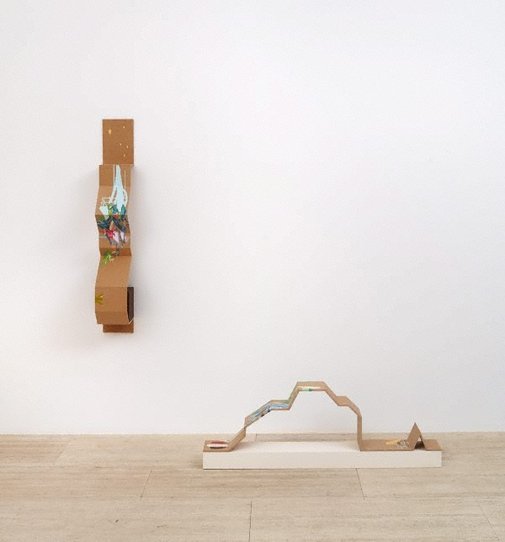 Raafat Ishak works across painting, drawing and installation. His distinctive, highly stylised visual language draws on his Arabian cultural heritage, architecture, the conventions of modernist abstraction, and graphic symbols filtered from a range of sources in everyday life.

The two discrete but closely related objects 'The New Egypt' and 'The Old Egypt', are among a number of recent projects by Ishak that respond to the Arab Spring and Egypt's protracted transition to a political democracy. The aggregated panels that comprise each work invoke the form of an unfurling scroll- historically a medium of civic declaration- but also a structure buckling under pressure. By contrast, the painted imagery dispersed across their surfaces appears elongated, countering the implied downward force. Echoing this antagonism between notions of repression and resistance, 'The New Egypt' hangs on the wall, sanctioned, perhaps revered; 'The Old Egypt' lies on the floor, as if defeated.

The works take their titles from two suburbs in Cairo which translate literally as 'new Egypt' and 'old Egypt'. The former is home to bureaucratic and military buildings, the President’s residence, the airport and main stadium, and upper and middle class residents. The latter, which runs along the Nile, contains historic churches and synagogues, cemeteries, the main garbage tip, and is where many marginalised and underprivileged people live.

Ishak invokes these two areas of the city as emblematic of the oppositional ideologies shaping the current political climate in Egypt - but, crucially, according to a confused or inverted logic. 'New Egypt' is occupied by the 'old order' which presently retains power, while the concerns of the revolutionaries are better reflected in the institutions and inhabitants of 'old Egypt'. This inverted logic is expressed in an abstracted, highly codified way through the paintings that stretch across the surface of each panel. In Ishak's characteristic style, these combine diverse and loaded imagery from the Southern Cross, a black cube and industrial machinery on the one hand, to an Egyptian flag, staircase and scarab on the other. Complex and delicately rendered, they invite the viewer to speculate on the points of difference between the two ideological positions.