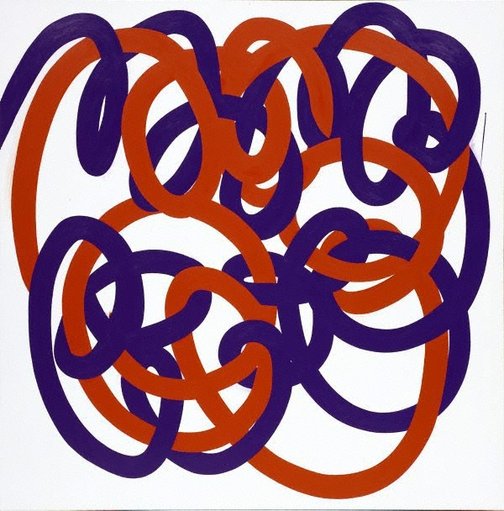 Gemma Smith's practice in painting and sculpture explores abstract form, materiality and the perception of colour. Her 'Tangle paintings' of recent years demonstrate a marked departure from earlier series focused on hard-edged geometry. Although these newer works introduce a gestural approach, they remain grounded in a measured technique that produces a visual conundrum for the viewer. Thick, sweeping loops of brushwork overlap and intersect in elusive ways, producing a confounding optical effect that is amplified by the scale of the canvases. Here and there, wisps and drips of paint breach the clean edge of Smith's curved lines, alluding to earlier stages in the making process which remain embedded in the final piece but, for the most part, enigmatically obscured from view.

Smith characterises the 'Tangle paintings' as "a balance of two approaches: on the one hand I labour over small shifts in colour, constantly adjusting them as the work progresses, but on the other, there is a predetermined plan to the organisation of the painting" (Gemma Smith quoted in 'Loxley and Smith discuss abstraction', Gemma Smith considers the work of Margo Lewers, Penrith Regional Gallery, November 2011, p 6). This statement reflects her approach to composition as a kind of 'problem-solving' exercise and, more broadly, her engagement with formal concerns embedded in the historical trajectory of modernist abstraction. She brings to the latter a playful sensibility. For example, her 'Adaptables' series of sculptures, begun in 2006, are flexible, modular structures that invite manipulation by the viewer, subverting the ethos of aesthetic autonomy. Likewise, her series of 'Chessboard paintings' borrow the formal design of a chessboard and by extension its association with game-play and strategic decision-making.

While in the past Smith's works have been deeply influenced by colour theory, for her latest series of 'Tangle paintings' - among them 'Overshoot (Purple/Brown)' - she worked with colours 'straight from the tube' onto a stark white ground. This was a deliberate attempt to break her inclination toward certain colours mixed by hand and juxtaposed in habitual combinations. It also implicitly refers to the utilitarian strategies of minimalist painters in the 1950s and '60s, such as Frank Stella, who emphasised the character of their material in its raw or 'found' state - though Smith's works are ultimately more intuitive in spirit and execution. For the first painting in the series, Smith paired the tube colours Charcoal and Yellow, which are pervasive in the urban landscape of Pittsburgh, USA, where she made the work. This engagement with visual cues and references from everyday life signals a new direction for the artist.

Browse other works by Gemma Smith 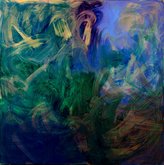