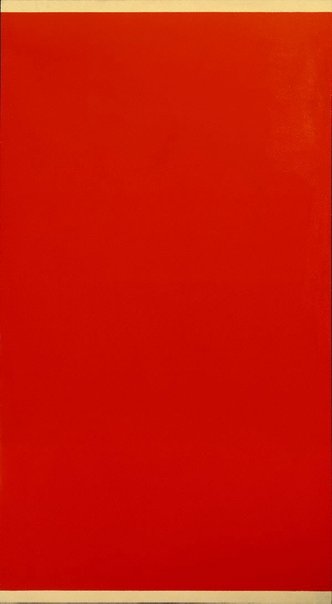 William Turnbull is a painter, printmaker and draftsman but is primarily known as a sculptor. Turnbull doesn’t care for these distinctions and sees his work as part of a single aesthetic continuum. His sculpture, though wholly abstract, tends to use organic shapes and so has been seen as having biomorphic affinities rather than as being totally non-objective, and certain subjects appeared perennially throughout his career – the head, the standing figure and the horse. Turnbull’s paintings, broad expanses of uninflected colour, are unambiguously abstract – a feature also reflected in his titles, which he chooses for their lack of association (for example ‘6–1969’ is the sixth painting he made that year).

Following his release from the armed forces after World War II (he served as a pilot), Turnbull studied at the Slade School of Fine Art in London before moving to Paris to complete his apprenticeship. In the 1950s he responded to the influence of American art, particularly the work of Barnett Newman. Turnbull usually favoured a wide, unbroken expanse of colour, occasionally cut by a diagonal or vertical division: ‘6–1969’ is a tall rectangle, a near monochrome panel of bold saturated red, held in check by a thin cream band at the top and bottom. It has a sense of the human scale, a person-sized reference, though of admittedly heroic proportions, that relates to sculptural totems and standing figures.

Turnbull emphasises the painterly concerns of texture and colour but also imbues this work with a sculptural dynamic. The tensions created at joins and junctions of units or materials animate the form and he equally capitalises on the shared contour of abutting colours in his painting without losing the coherence of the whole. ‘I am concerned’, he wrote in 1963 ‘with the canvas as a continuous field, where the edge created by the meeting of coloured areas is more the tension in a field than the boundary of a shape’.1 ‘What matters is the painting as object, not the painting as illusion. The paintings have a strong sense of “thingness”’, Turnbull noted in an interview in 1998.2 Well aware of the play of figure/ground in the composition and on the wall itself, his bold slabs of colour set the literal shape against the depicted one so that Turnbull’s paintings can be seen almost as a low relief or an object on the wall.

Browse other works by William Turnbull