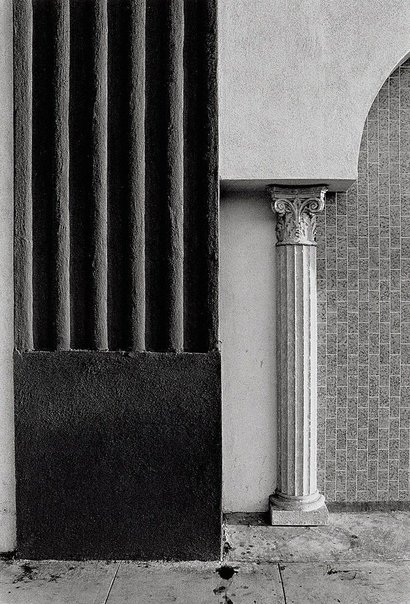 ‘A lot of buildings I photograph are not “architecture” that you would praise particularly. They’re very common, very forgettable pieces of architecture but I really enjoy giving those structures another life in the form of a photograph.’ Grant Mudford 1989 1

Like Robert Rauschenberg, Mudford explores the urban landscape, with bold, abstracted minimalist forms that emphasise geometrical designs and texture that reflects his early interest in, and study of, architecture. His images of buildings reduce the mass of concrete, bricks and mortar to a constellation of surfaces and textures, light and shadow, that become formal abstract compositional components. Mudford’s shift to America from Sydney was as an early recipient of an Australia Council grant allowing him to spend time initially in New York with the aim of developing his art form. Ralph Gibson introduced him to the network of photographers in the city, but it was not until he travelled through California that he found the space and light that both reminded him of Australia and captured his artistic imagination.

Working with the elements of texture, form, space, light and the grain of the film, Mudford creates minimalist, yet slightly surreal images of the urban-scape that defy context and which, over the course of his work, have become increasingly abstracted. An early influence was the work of Walker Evans with his brutalist approach to the subject and strong contrasting elements that utilised light and dark to great effect. In ‘Los Angeles’ an even light flattens the components of a multi-textured building façade that incorporates the postmodernist features of monumental Grecian sources, adding to the confusion of space and form. Any reading of visual depth is disturbed as the interplay of form, light, mass and texture interweave to deceive the eye, as the vertical striations flux in and out of the image. The vertical elements are compressed into the picture frame, emphasising the disparate textures and forms that are indicative of Mudford’s architectural imagery.

Judy Annear, What is this thing called photography?, Sydney, 1999, (illus.). no catalogue numbers