Ilma describe both the object and the ceremony performed by Bardi people. Roy Wiggan received the stories embedded in his Ilma’s from his father, after his passing, through a series of dreams. Wiggan’s Ilma predominately revolve around life at sea experienced by his father, Henry Wiggan, a Bardi man of the Kimberly region who skippered the Sunday Island Mission lugger. His adventures and misadventures in the Indian Ocean inform the Ilma that are used as dance apparel in the ceremonies associated with the stories, as well as being works of art. The Bardi seafaring peoples’ homeland includes one of nature’s phenomenon, the Buccaneer Archipelago, a marine environment abundant in treacherous tides, rips, whirlpools and overfalls of which, a number of Wiggan’s works reference. The stories that were given to him aid in understanding the landscape and Bardi Ngarrangkarni (lore and culture passed down from the ancestors).
Ulnaadda refers to the King Sound Gulf where there is an island with a bay where refuge can be sought from the open sea during high tides when whirlpools make it difficult to navigate through the oceans. Ulnaadda means shelter from the strong current and in this Ilma Wiggan details the directions of the whirlpool. 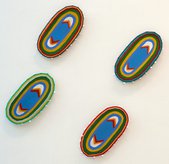