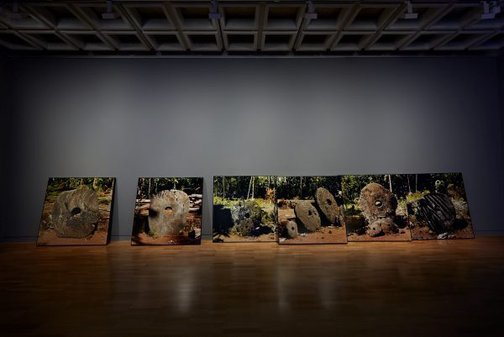 'Limits to growth' belongs to a body of work by Nicholas Mangan engaged with political histories in the Pacific and their intersection with a globalised economy. The installation brings two vastly different currencies into dialogue: Rai, a form of stone money used in the archipelago of Yap in Micronesia, and the contemporary digital currency bitcoin.

Historically, Rai was quarried manually, its value determined in part by scale. In the 19th and 20th centuries, a series of interventions by foreigners devalued the currency and Rai was eventually superseded by the US dollar, with value tethered to the abstract fluctuations of the stock market. As with Rai, bitcoins are acquired through a process known as 'mining', but labour is outsourced to computers and trade is virtual. Ironically, the powerful server systems this requires are still dependent on natural resources.

'Limits to growth' considers how these currencies reflect shifting cultural attitudes to production, value and exchange. The work also embodies this in concrete terms. Mangan financed the large photographs of Rai by mining bitcoin, using energy appropriated from the university where he works.

Browse other works by Nicholas Mangan