Dancing Ganesh and the Mahavidyas 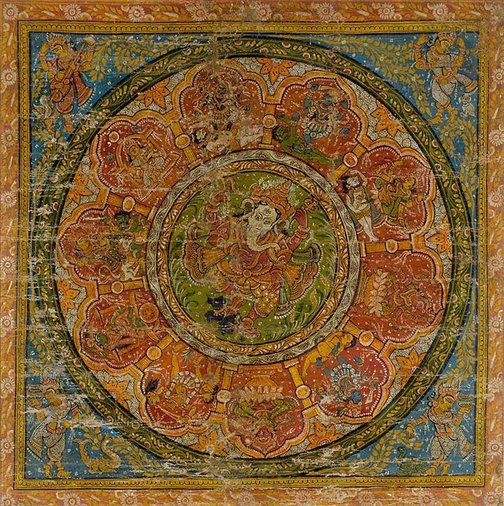 It is common to see Ganesh dancing with the seven Mothers, but extremely rare to see him dancing with a group of goddesses called to Mahavidyas (the Great Knowledge). Even rarer is such a representation of a 'yantra' or mandala (a mystical diagram) with Ganesh as the central figure. Perhaps it reflects the influence of Rasamandala in the city of Jagannath, although it is an essential element in tantric ritual.

That this was meant for tantric worship is clear from the inclusion of the ten Mahavidya goddesses whose cult has remained especially popular in Bengal and Orissa. They are of course all emanations of the Great Goddess and include such well-known Buddhist deities as Tara and Chinnamasta. Indeed, some are also included among the Jain Vidyadevis. Thus, it seems that they are a syncretic group created when Buddhism was disintegrating after the twelfth century.

There is nothing unusual about the figure of dancing Ganesh except that no bowl of sweets is included. Instead, his trunk grasps his broken right tusk, which seems to be an iconographic innovation by this artist. According to the myth Ganesh did break the tusk and hurled it at the moon which had dared laugh at his antic. Hence, the marks on the moon. The four goddesses in the four corners - Ganga and Yamuna at the bottom and Sarasvati and Lakshmi at the top - also dance in poses from the Odissi dance.

Dancing Ganesh and the Mahavidyas