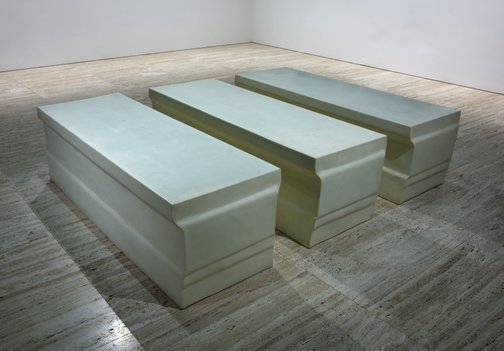 Perhaps Rachel Whiteread’s most talked about work was ‘House’ 1993, a major project in London, much celebrated after it won the Turner Prize. Her earlier works were all created by casting the inside of domestic objects and spaces. ‘Ghost’ 1988 was a negative mould of the inside of an entire room. The effect was to turn space into a solid object so that the viewer is placed outside real space in an imaginary relation to the real. Like the strange perspectives of the British painter Anthony Green, Whiteread gives the viewer a sensation of being in some impossible viewing position, within the vanished walls. ‘House’ was the greatest of these projects, creating the inside of an entire house. When the demolition crews removed the walls and roof, the ghost of the interior was revealed as a solid form, a memorial to a vanished street of houses in London’s East End.

Whiteread’s positive casts of beds and later mortuary slabs continued the use of objects and spaces associated closely with the body but were now exact replicas rather than negatives. The materials, however, were strange: silicon rubber, resins with different colours, a mattress in solid yellow rubber, which is immediately uncanny. It is obviously very heavy and utterly stiff, making it most uncomfortable as a bed. Its appearance is as removed from our expectation of a mattress as the cast of a room in ‘Ghost’ is from physical space. By shifting the object out of direct simulation, she also raises it to the general. It is not the bed we know, not just any bed; it aspires to be the memory of beds in general.

‘Untitled (elongated plinths)’ extends Whiteread’s repertoire considerably. The plinth forms are cast in the negative from a classically moulded silhouette of a dado but it has been stretched to make a positive form the size of a bed or mortuary slab. They are exactly the right size to be containers for the human body and could easily be read as sarcophagi. In addition to being made strange by elongation, the material is a semi-opaque white plastic over foam, which has a strangely ambiguous materiality. From a distance it could be marble, reinforcing the tomblike appearance. At close quarters, however, the light seems to be within the objects or passing through them. This apparent transparency or luminosity makes them very mysterious, like the cryogenic containers so often represented in science fiction movies. A slumbering presence lives on within the forms.

The Idea of Art