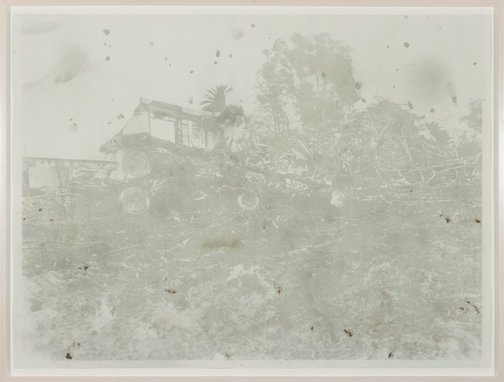 Matthew Brandt is an experimental photographer from the United States who blurs the lines between the photograph and the photographed. He makes use of traditional photographic processes and techniques, such as gum bichromate1, to question the nature of the photographic object and explore the physicality of the natural world around him. Possessing a MFA from the University of California Los Angeles, Brandt’s photographs are held in the collections of major American institutions such as the J Paul Getty Museum, the Metropolitan Museum of Modern Art and the Brooklyn Museum of Art.

The subjects of Brandt’s work directly influence and impact on the ultimate appearance of his photographs. ‘000463601, 'Dodge House by Irving Gill’’ depicts the 1970 demolition of the Walter L Dodge House in West Hollywood. Brandt sourced the original photograph from a public library and reprinted the image using a pigment created from dust collected from the apartment building that now occupies the space Dodge House once inhabited. The result is a ghostly and beautiful glimpse of the building that was and a tangible representation that appears as transient as the nature of things in themselves.

The creation of photographs utilising physical elements from his subjects is a hallmark of Brandt’s methodology and photography. In the ‘Lakes and Reservoirs’ series of photographs, Brandt submerges images he has printed of bodies of water from across America in water from the lake or reservoir featured in the photo. He has also printed photographs with pigment crafted from bubblegum, cake icing, barbeque sauce, toothpaste and cold and flu syrup. While controlled, Brandt’s experimental processes are unpredictable and leave much to chance ensuring each print is always unique.

1. Gum bichromate was a type of photography popular with pictorialists 1890s and the 1920s and can resemble charcoal or watercolour drawings.