The academicians of the Royal Academy 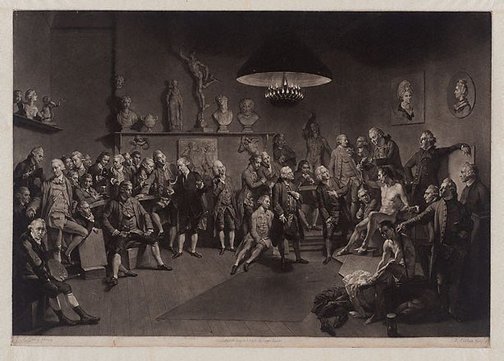 This large and ambitious mezzotint reproduces Johann Zoffany’s group portrait (now in the Royal Collection) depicting members of the recently established Royal Academy. Ranks of academicians are assembled in the life-drawing room while a model is being posed on a simple platform. Life drawing was a central activity in the academy’s program of providing professional training for artists. Taking as it were centre stage is Sir Joshua Reynolds, president of the newly formed institution; he is seen holding his silver ear trumpet and gesturing towards the life model while turning to converse with the treasurer, Sir William Chambers, and the painter Francis Newton.

The room in which the academicians have gathered betrays a plain, no-nonsense practicality, befitting not only its function as a drawing school but also its role as a setting for serious, good-humoured discussion where gentlemen could meet in an ambience of enlightened ‘clubability’ (to borrow Dr Johnson’s word).

Seated on a packing crate in the left foreground with brush and palette in hand is the painter Zoffany. Interestingly, the only engraver represented is Francesco Bartolozzi (shown directly below the large suspended oil lamp, clutching the arm of a companion). Controversially, upon its founding in 1768 the Royal Academy excluded engravers as members (at the Académie Royale in Paris they had been allowed membership since 1655), but the rule was revised years later. An exception was made for Bartolozzi, who had to be spuriously admitted as a painter. The two female foundation academicians, Angelica Kauffman and Mary Moser, are represented by portraits hanging on the right wall: the presence of naked males in the room meant that it was improper for them to attend the life school.

Displayed on shelves and on the chimneybreast are casts of antique sculpture, key aids to artistic instruction. It was only after extensive drawing from plaster casts and thorough understanding of ideal human form that students were allowed to progress to drawing from the (imperfect) life model. Mastering the process of idealisation – that is, synthesising an abstract idea of the body with empirical observation – was fundamental for the creation of Italianate Grand Manner painting, which Reynolds was striving so ardently to promote.

Richard Earlom , after Johann Zoffany
The academicians of the Royal Academy

Browse other works by Richard Earlom

Richard Earlom
after Henry FuseliLear casting out his daughter Cordelia 1792424.2009