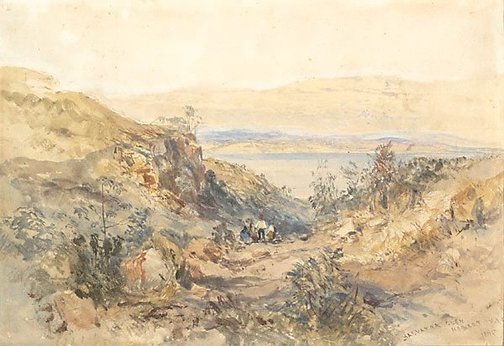 With splendid view of Hobart and the Derwent, Salvator Glen was named by George Frankland (1797?-38), Surveyor-General of Tasmania and an amateur artist, after the seventeenth century romantic Italian painter Salvator Rosa (1614-73), much admired in the nineteenth century. Salvator Glen is at the top end of what is now Salvator Road, West Hobart. There are watercolours by Francis Simpkinson of the same subject, inscribed 'Salvator Rosa's Glen', dated August and November 1845 respectively - refer to the 'Illustrated catalogue' in Max Angus' 'Simpkinson De Wesselow, landscape painter in Van Diemen's Land and the Port Phillip district' (1984) pg. 179 (50) and pg. 180 (61).

Francis Simpkinson, later Francis Simpkinson De Wesselow (1819-1906) and a number of other talented amateur painters in Hobart in the 1840s were influenced by Skinner Prout and often painted with him.