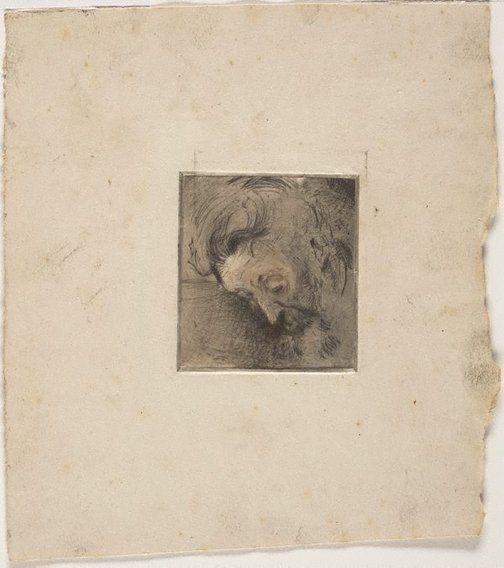 Eugene Claux was born in England but was in Sydney by 1944, when he was studying at East Sydney Technical College (National Art School) between 1944-47 (plus evening life drawing classes 1948-49). He had two paintings exhibited in the Wynne Prize in 1946, and another in 1947. He was also known for black and white illustration and caricature. He died after suffering a "mental breakdown" in 1950 at the age of 21.

This small drypoint is very rare, and was made while the artist was a third year student at the East Sydney Tech; according to the artist's sister, he made four impressions. The subject is the artist's father, whom he has presented as if he were in a portrait by an Old Master.

Printmaking was not formally taught at the NAS in the 1940s, but at least one of Claux's contemporaries, Elizabeth Rooney, is known to have undertaken self-taught experiments in intaglio printmaking while a student there by the end of the decade. As such, this drypoint provides a fascinating insight into Sydney printmaking activity in the 'quiet' years between the 1940s and late 50s, when only a few Australian artists were working in the area (there is just one etching by Claux in the National Gallery of Australia collection, also from 1946, a view of Sydney terrace house backyards).

There is one painting by Claux in the collection, purchased in 1950 shortly after the artist's death, from his father Kleber Claux (the subject of this etching).