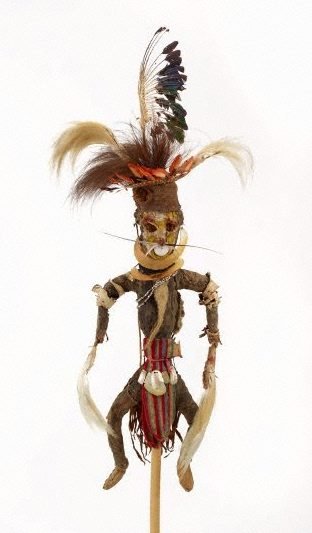 Constructed from an astounding array of natural and manufactured materials, this 'kund gale' (effigy) is dressed in the ceremonial attire of a Wahgi male dancer. It is replete with 'konzap kine', a traditional apron decorated with pearlshells. Made by men, the 'kund gale' is used only during the major pig festival called 'konggar' – an extended ritual cycle held once in a generation. Over a period of years, rites are performed, pigs reared, and ceremonial structures built. During the final days of celebration the correct 'bilas' (body decoration) are worn, including bird of paradise plumes.

On the day before the climax of the festival, when hundreds of pigs are killed and pork distributed to family and exchange partners, men perform 'trampling the fence'. This involves rushing onto the ceremonial ground in a display of martial force with one dancer carrying the 'kund gale' mounted on a pole above his head.

© Wahgi people, under the endorsement of the Pacific Islands Museums Association's (PIMA) Code of Ethics